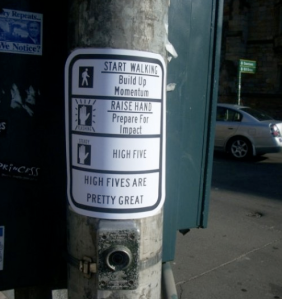 Tuesday is my Saturday.  So, last night wifesy and I went out for some tacos and margs.  We live a bit outside of the city so wifesy can be closer to her work and so I can focus on writing.  As a result, we often feel stranded in nowhere’s-ville.  It’s amazing that you can go less than an hour outside of a major city and feel like your are in a completely different country.  Where we live it truly feels like the American, old-west.  If you squint your eyes tight enough you can imagine an old horse trough and tie-up right where the Starbucks is at the edge of the Ralph’s parking lot.

It’s really easy to judge everything around you here, especially after living my Manhattan life for twenty years and then my Europe life for two.  It’s easy to thumb your nose at it.

Wifesy and I sat at the bar since all the tables were taken up at Burrito Bonanza where we normally go for tacos.  Burrito Bonanza is one of those chain places that you’d never go to if you lived in a major city, unless, of course, you went as a joke.  But, we now live in hick-town so chainy, Burrito Bonanza it is.  I don’t think of myself as a people-elitist the way some people are music-snobs or foodies, but I will admit to liking a person who enjoys intellectual conversation over clubbing.  So, I guess you could say the rest of the customers at the Bonanza weren’t exactly our kinda people.

To my left was a girl dressed all in black with her waitress apron still tied around her waist.  She smiled and sipped her after-shift drink.  The bartender was a girl too this time, which is a change and a rarity for Burrito Bonanza.  Wifesy and I liked the energy of the girl-bartender and we liked what it did to the vibe of the Bonanza in general.  Like I said, wifesy and I have just come back to our native land after spending the last couple of years in Great Britain.  In Britain, the bar culture is quite different.  You go to a pub to get cozy and to unwind.  Not to just “pick up” as we say or to “pull” as they do.  Sure, ladies and gents cruise each other at the pubs in Britain, just like they do any where else in the world, but the beauty is – that’s not ALL they do in a bar.  They meet, they chat, they commiserate, they join a community, for f*ck sake you can even bring your dog!  Not at the Burrito Bonanza.  At the Burrito Bonanza women who are sitting at the bar are signaling that they want one thing and one thing only – C*ck.

They are not saying, “Hey, there were no seats left in the main area, so we had to sit at the bar.”  That’s why the girl-bartender was so soothing.  It gave the place a less cruisey feel – more of a British feel, but with tequila.  Very soon, waitress-who-just-go-off-shift was replaced by three Mexican-American girls.  The girls ordered “Micheladas”, which I kept mishearing as “Pinche-ladas” causing us all to laugh for different reasons.  Me, because I was thinking why do they call a tomato-beer a F*ck-Ice-Cream and the Mexi-Cali girls because, “Hey, would you listen to what this crazy white girl is saying?”

To wifesy’s right sat two self-proclaimed “sorority girls”.  The sorority girls flirted shamelessly with the one male bartender who looked old enough to be a paper boy.  You could tell he was new to the flirting game because the comebacks didn’t roll off his tongue as they would for an older guy or a city bartender for that matter.  To put it mildly, sorority girls had him unnerved.  Sorority girls talked to anyone with testosterone in a button down while they sipped beer through straws.  I mean – Beer. Through. Straws.??!!  I really tuned into sorority girls when two button downs came over and started talking to them about their day jobs.  Turns out the two button downs and the sorority girls were in the same “industry” and in that industry, they were all in sales.

Ugh.  I had done sales, eons ago.  It was my first job right out of college.  It was the first and last suit job that I’ve ever had in my life.  I sold payroll services to small companies.  And like a lot of sales, what I sold no one really needed.  Honestly, the payroll we sold your aunt with bookkeeping skills could do or even your decent accountant-friend.  But, don’t tell the businesses that…then you won’t make quota and what good would that do?

The two button downs and sorority girls to wifesy’s right talked about just that – meeting quotas or not meeting quotas and the bonuses you get when you do.  Three of them worked at the bigger, named company in their industry.  As a result, when they made quota they got decent things – like trips and monetary bonuses and other perks that helped you pretend you weren’t in sales.  These earned gifts were good enough that if you squinted your eyes just right you’d think you were a cool kid with a parent who smokes.  A cool kid who through braininess and a desire to make the best out of a bad situation, had accrued enough Marlboro points to buy that camping gear he had always wanted.  That’s who you’d think you were if you squinted hard enough and contorted your brain just right.  You’d think you were the kid who dreams of camping and not the young adult trading their worth for breakable shit picked out of a catalog.

Now, one of the four wasn’t quite so lucky.  One sorority girl worked at a smaller company and when she made quota she received what she called, “the corporate high-five”.  Not even catalog stuff.  A high-five.  A gesture a-holes and heros make alike on the basketball court or in the hallways of douche-town.

This was the moment when life came crashing down on me.  I mean, is there anything sadder sounding than the “corporate high-five”?  As the conversation went on, it turns out the two sorority girls were out celebrating the one girl making her quota.  For which she received a – wait for it – CORPORATE HIGH-FIVE.  (I suppose she wanted something more like two margaritas and a plate of nachos, for f*ck sake.)  I almost cried.  Because I know who this girl is.  She’s an ex-sorority girl who’s still holding on to her sorority girl title.  She’s just out of school and sorority life was when she felt good, when she had meaning.  So, here she is, hustling at what is her first job.  She’s doing well.  Excelling.  Making quota even.  And for that she’s getting an incredible, hope-trading, dream-killing, corporate high-five.

How long?  That’s what I thought.  How long until blondie drinks herself silly, goes home and gets pregnant by the guy who awarded her the high-five, but is still married to his high school sweetheart?  She gets pregnant, quits the industry job to raise her kid.  Meanwhile, all her ex-sorority sisters married up, live in cute, gated communities, outside of big, urban areas.  They go to taco tuesdays with the other gated community soccer moms.  They won’t go with ex-sorority girl, corporate high-five, any more because -ew- she’s a single mom and -uck- a waitress.

What a f*cked up, American lesson to learn.  I suppose there was no better place for me to see it unfold than at the Burrito Bonanza chain, right before I got back into my car and drove the block home…thinking the whole time, this trip would be much better on a horse while looking up at the open, night, sky.