I began this post at 4am.  I was tossing and turning in bed, thinking about what to write, before I decided to get up and actually write.  My eyes sting, my bladder is full, but  it doesn’t matter, right now I must write.  I slipped into my office and eased into my chair.  It’s a big, leathery, chair on those wheels not meant for plush carpets.  It sticks as I try to inch closer to my desk.  I can hear my dog get up.  She probably hears the typing.  I hear the jingle of her collar and her name plate, as she gets up and shakes out her fur.  The door creaks as she pushes it with her nose, scampers in, and grunts at me.  Her grunt says, “What are you doing?  It’s too early.  We don’t write, just yet.  We have a few more hours.”

I stroke her head and calm her down.  I get up and pull her bed in from the living room.  She’s used to sitting in my office with me while I write.  Immediately, she gets in the bed and calmly goes back to sleep.  Routine.  Little things, they all love routine.

I remember a show I had attended about a year ago.  I was living in Europe, but had been called to Los Angeles for a fairly big job.  I flew out and stayed with an old friend of mine.  The old friend is someone I went to school with.  She is someone that were it not for our long history, I’m sure I’d never be friends with now.  She is someone who, unfortunately for her above all else, has never grown.  She’s emotionally still exactly where she was in college.  I am not.  I’m proud of that.  I’ve worked on myself and though I still fail constantly, I love who I am and where I am going.

But, back to the show.  I remember a particular comedian on stage.  For me to remember a comedian at this point, is a big deal.  Comedy has become such background noise for me, which is in keeping with how long I’ve done it.  I’m like the girl who has worked at the bakery.  “How do you stand it?” people might think.  “How do you work at a place with all those fresh donuts and cakes and pastries and not go crazy stuffing your face with them?”  To the woman who’s worked at the bakery for years, they’re not fresh.  They are everyday.  It would take a damn good donut or just the right donut to break through her donut malaise.

This place is called "Psycho Donuts". I'm not kidding. They have a donut called, "Cereal Killer".

So, I’m watching this comedian in my comedy malaise.  He’s just a regular guy.  He’s a good comic, but not a spectacular one.  He’s just a young, regular, guy who works as a newly employed writer for some kind of women’s network.  He talks about his wife and his newborn baby and living up in the Hollywood Hills.  He’s not a rich guy.  He’s not a famous guy.  He’s just a guy.  What he says next, though, cuts right through me.  He talks about walking up in the hills with his newborn and his wife and wanting a machete.  He wants a machete because he’s filled with so much love for his newborn and his wife that  he wants to protect them at all costs.  He wants to protect them against unseen and most likely invented threats.  He loves so fully that his love has made him paranoid and protective.  He says this all in a hysterical way that is truly funny, but it’s the realness of it that reaches me.

At a certain point in your life, if you’re doing things right, one realization becomes just about the easiest thing to understand.  You realize that life is about loving ONE person WELL.  If you can do that right then you have succeeded.  I am lucky enough to have that gift or at least the gift of working on that gift.  That is if you consider lucky to mean a word that signifies having worked for something, which seems to be the exact opposite of lucky.  So, I suppose I’m the one who gets the thing when she does stuff right.  I’ve won the life prize.  A family I adore.

Now, it doesn’t stop the struggle.  It doesn’t stop the life fight.  I’m still up at 4am wondering what to write.  I break out in night sweats at the thought of securing just the right job.  I worry about my family.  I even wonder about evolution.  When Wifesy sees someone engaging in incredible cruelness, for example, when they bring in a dog howling in pain with a broken leg, but yet the owner is more concerned about the dog’s fleas, she sees that person as less evolved.  That’s how her (and another mutual friend of ours) make it not okay per se, but understandable in their brains.  They think, “that person just hasn’t reached a particular place on the evolutionary scale of things.” 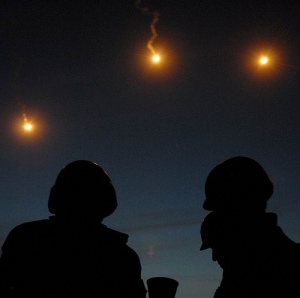 I understand the guy with the machete.  He’s already fought long and hard to find the right fit for himself.  Then he’s created a little something in his own image.  So, whether real or imagined, he’s swinging at whatever is in front of him hoping to keep them safe.  I understand this guy.  I am his female counterpart.  I protect what I love.  I’ll take up a sword and help any man or woman protect what is theirs.  It might be a baby or a woman or a dog or even a creative project – a labor of love, of sorts.  At 4am, as I look out the window at the incredible thickness of the black night, as the dog sleeps peacefully next to me, and Wifesy dreams in the next room, this is all I think about.