Okay, so there’s a douche-donut named, Bryan Fischer of the American Family Association (which is clearly Native American English for “I Hate Gays”) who wants to start producing label warnings against homosexuality.

If you don’t know, in Europe and other locales, the warnings on cigarette boxes are far more graphic and in a much larger font than they are, here, in the States.  This gross-out-fest is apparently supposed to stop people from putting cancer sticks into their mouths.  I don’t think it works, but here’s what it looks like: 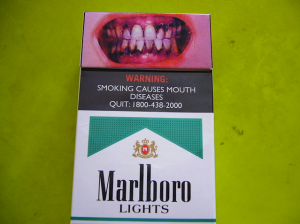 Christ on a cracker. You may lose your lunch. Sorry.

Now, Mr. Fischer would like to create similar images to influence people away from the gay.  He does not say where these “warning” labels should appear, he just makes a blanket statement that they should be produced and displayed for the “gay community.”

My guess is that Fischer would like these images to be as graphic as possible.  I’m guessing he’d like to see still shots of ass cancer and HIV lesions, and herpes, and I don’t know – I suppose – some kind of ball fungus.

Remember those photographs of chancre sores your Health Education teacher solemnly walked through the aisles during Sex Ed?  Stuff like this…. 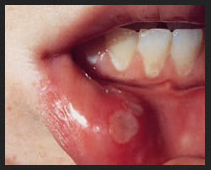 You mean if I make-out with Bobby Jones or his sister, Cheryl, I’ll get one of these? Egads.

Did it stop you from sticking your willy in things or rubbing your coin purse across a person of questionable character?  My guess is that they did not.

If you really wanted to stick warning labels displaying the consequences of homosexuality all over things, well, then you’d have to create images of fabulosity because that seems to be a much more universal consequence of the gay.

We all know the truth – a “gay-deterrent” consisting of a fabulosity poster may have the exact opposite effect on today’s youth, much like cigarettes are for the rebel, the fabulosity poster becomes the recruitment image for the boy or girl on the fence.  It’s not going to stop them.  It will only encourage!

And where, pray tell, should these posters be hung?  By the chimney with care?  I think not.  If you want to “display the gay away,” well, then you’ll have to hang them around gay-ish places.

That fabulous tapas bar you just found?  Thanks to the American Family Association all of its windows are blacked out with posters of Lady Gaga.

That Broadway musical you want to see?  Good luck seeing it through that projected loop of Abercrombie and Fitch images.

That divine boutique hotel you want to stay in by the sea?  Okay, but understand that it’s now covered in a pink warning label for Proseco or another equally bubbly substance.

Sorry, I lost control of my self there.  I blame the gay.  Another gay consequence is a raging sense of humor.  In that regard, I am guilty as charged.

Sweet Mother is updated daily-ish.  Join the ride by clicking the “follow” button at the top of the page.

Cool LA Things that Happened on My Berfday