So, recently the site I have under my name was hacked.  If you went to beckydonohue.com, over the last couple of days, all of the info sections – bio, press kit, videos, blog links – all gone.  A funky song also played under the site.  I suppose the little ditty was the calling card of the hacker.  His version of a mint on the pillow.  Now, I don’t use beckydonohue.com for much.  It’s mainly a static site at this point.  In the future it will be re-designed to reflect my real portfolio (the one there is several years old and not indicative of my current work).  It will also reflect the work from this blog, potentially my book, and a couple of  other projects I have working.  But, right now, it’s a static place for my comedy.  Regardless, I don’t want it swaying in the breeze with its pants down, as it was post-hack.  I, unfortunately, think that getting hacked in this day and age if you have any kind of online presence is inevitable.

Now, I can’t get into the psyche of a hacker.  To me, it just seems like they go into things that are not theirs to go into and they feck them up.  I don’t know how to get involved in nor analyze that mindset.

But, to them, I think it seems different.  I suppose they see themselves as teaching the luddites among us a valuable lesson.  They fancy themselves renegades and rebels of the cyber minefield we’re all trying to navigate in our own ways.  A hacker says to himself, “See, you left your bicycle lock open.  So, now I’m gonna take your bike.  That will teach you to lock it up next time.”  Is that what they’re thinking?  Sometimes you hear of Hackers like Anonymous taking down big corporate websites to make a point in regards to social issues.  I almost get that.  However, they don’t only go after the big guys.  Other times, like with my site, it seems more like some lonely guy sitting in his basement with WAY too much time on his hands fecking things up.

It’s a bit like graffiti, isn’t it?  You could make the argument that certain forms of graffiti are art and that they’re created by brilliant, creative, artists.  A hacker is nothing if not a bit of a computer genius.  Yet, on the other hand, other versions of tagging or graffiti simply look like attempts to feck things up.

Which one looks like art to you?  To me, one is definitely art and the other nonsense. 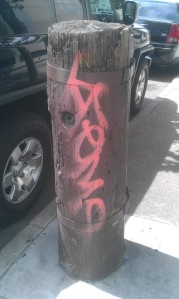 A lot of the objectivity that one possesses in regards to the graffiti vs. art argument (and the hacker vs. genius argument) has to do with whether or not it happens to you.  I’ve actually had a friend of a friend say to me, “Can you believe people are worried about cyberbullying and cyberstalking?”  I said to her, “Yeah, I can.  Clearly, you don’t do many things online.”  If she did, I think it would give her more pause.  It’s one thing for a company or a large entity to get harassed, it’s totally another for it to happen to a vulnerable kid.

To stretch the analogy a bit, when I would see certain graffiti artists in Manhattan, often I have enjoyed their work.  Until…until, it was on my building.  And then I actually felt for the landlord and the super who had to repaint over the front door, literally, once a week.  I remember coming home one time and actually smelling the fresh paint from the spray can that had just been used to tag my front door.  I remember thinking, “If I catch this fecker, I’m going to give him a what-for.”  Now, most people wouldn’t get involved with a New York city tagger.  But, I would have.  I mean, the people in my building worked hard and our building was expensive.  We were all struggling to get by, just like the people in the tagger’s building.  But, did the vandals care?  No, they just thought, “How can I feck this up?”  Is graffiti funny?  Social Commentary?  Kids just expressing themselves?  It could be.  Until it happens to you…then it just seems like a pain in the ass.

What I liked was my “team’s” response to the hack.  And yep, I would say I have a team.  I have a web-hosting company that I trust.  I can actually get them on the phone, 24/7, and they respond to my needs without me having to pay them to do every little thing.  My web designer is the same way.  His company is Royal Deer Design and I swear, if you’re looking for web design and coding services, he is your guy.  Why?  Well, because he’s good and because when my website hit the hacked-fan, he fixed the thing, pretty fast, and without a massive charge.

If you’re going to self host anything, you need a good team.  If you ever think about moving off of WordPress.com, you MUST have people with more knowledge than yourself around you.  Without it, your blog or site is the equivalent of a jewelry store with no alarm system.  But, I digress.  Back to our collective response.  I told my web hosting girl about the hack and she laughed.  I told my web designer and he laughed.  Then I started laughing and we all fixed the hack.  No one got bent out of shape.  No one lost their minds.  We just shrugged and fixed it.  Simple.

A website disruption feels stupid like someone pulling the chair out from under you when you go to sit down and of course (especially if you make money off of your sites) a hack is inconvenient, but in the end, you deal with it and you move on.

Welcome to life in the new, tech-age.

The hacks will come, but it’s how you deal with them that shows whether or not you will remain online.

feature, the rest of the photos by yours truly

33 thoughts on “Is Hacking the New Graffiti?”