I conducted an experiment yesterday that forced me to take off from posting.  It was, however, an experiment that involved writing.  Therefore, I thought it might be of interest to all of you.

I’m a huge fan of writers and I pay attention to writers eccentricities as a result.  Sometimes I think some ritual or another holds all the keys to creating a masterpiece.  That’s probably not the case, but it’s fun to think it could be that easy.

I know weird things.  For example, I know that Stephen King listens to music when he writes.  Hard driving stuff like Metallica.  I also know that Aaron Sorkin obsessively takes showers, over and over again.  I know that Dan Harmon has a “hero’s journey” theory that he’s simplified down from Joseph Campbell’s. 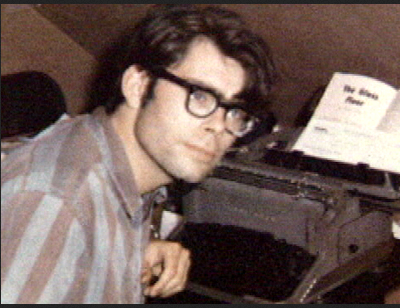 …a young Stephen at work.

So, the other day I was skimming the New York times and I came across the hot, young,   playwright of the moment — I can no longer remember his name, nor have I ever read his work…  (Apparently, he writes some interesting things about Islam.)  What I DO remember about him, is the showering.  When he writes, he showers often.  Sometimes up to six times a day.

There you have it.  There are two writers – the hot, young, playwright and Sorkin who both shower obsessively when they are writing.  Now, Stephen King and Aaron Sorkin also did coke while writing, as I’m sure a slew of other writers have, but I’m too cash poor to try the cocaine thing out.  But, lucky for you I can try out the showering.

Yesterday, my experiment began.  I drove Wifesy to work, ran a couple of errands, and came back to the lodge for my first shower.

I showered…and I will say this, you start thinking a lot in that goddermned shower.  Maybe this was it?  The thinking part?  Maybe that’s why the famous writers do it?  I was thinking a lot about the play I’m writing and sort of setting things up in my mind.  But, then again, I tend to do that anyway.  I’ll sit and stare at my computer for a long time if I’m not sure exactly what I want to write.

I did feel fresh after that first shower, alert even, and sort of buzzing with a “ready to go” attitude.  Now, normally, I workout in the morning, stay in my sweats, write all day, do any of my other household stuff that needs to be done, and shower as I’m finished for the day.  In my mind, that sets me up for relaxing once my day is through.  So, it was interesting to have a different morning experience.

I wrote for a couple of hours and then made some lunch.  I took a power nap and when my alarm went off, I ran upstairs to shower AGAIN.  This was the second shower of the day.  I was a touch groggy from my nap, so the shower was a good re-set.  I sat down at my desk afterwards and still felt a touch sleepy in my body, but definitely a bit more alert in my mind.  I wrote for two more hours.

Then I ran upstairs and showered for the third time.  After the last shower, I came downstairs and started writing this piece.  I felt like I could switch gears nicely, from my playwriting to this post, so that was a plus.

Overall, I think I get why these guys shower so much.  It has a way of making you mentally “fresh” again.  Plus, the automatic skill of bathing causes your mind to wander and where it wanders (thankfully) is usually towards your story.

Now, I only showered 3 times over the course of a day and sometimes Sorkin and the other guy shower 6 times or more.  All I could think about that was, how in the feck do they fit it in?  It seems like a lot of extra work.

But, I will say, it’s a good way to let things marinate and to recharge your brain.

I read somewhere about the writer who wrote “Everything Is Illuminated.”  The author was in a class at university and the professor (another famous writer, himself) said, “You have the right energy to be a writer.”  What he meant was that the student would write and write and write and when you want to write as a profession, you must have that energy, that follow through, that drive to get to the end of the story.  And then that drive to rewrite it all over again.

As far as I can tell, that is the work part and if obsessive showering helps you get through it then I’m all for it.  Hey, it’s better than cocaine, right?

What about you guys?  Any interesting writing rituals to help you keep your juices flowing?

Sweet Mother is updated daily-ish.  If you’d like to follow this blog, you can do so by clicking the “follow” button in the upper, right hand corner.