I have certain phrases that I say.  Now I even have ones that I write.  “Fecker” might be one that you recognize.  I say, “Let’s not get hysterical,” quite often.  I think it encapsulates a lot of the way I feel often.  We are a passionate people – humans – but sometimes we go too far.  Below are some examples.  They are so ridiculous that I’ve put together a “Monster Truck Rally” for them.  Each needs to be moved down, compacted, and put into its rightful box.

Bacon Condoms.
Not only bacon condoms, but bacon lube.  Christ, really?  Granted, I trip the light lez-tastic these days, but even I know that if the “p-unit” really tasted so ungodly then teenagers wouldn’t be falling all over themselves to get their hands (or mouths) on one.  So, let’s stop flavoring it.  Let’s go back to when a pussy-cat tasted like a pussy-cat and a kielbasa tasted like a kielbasa. 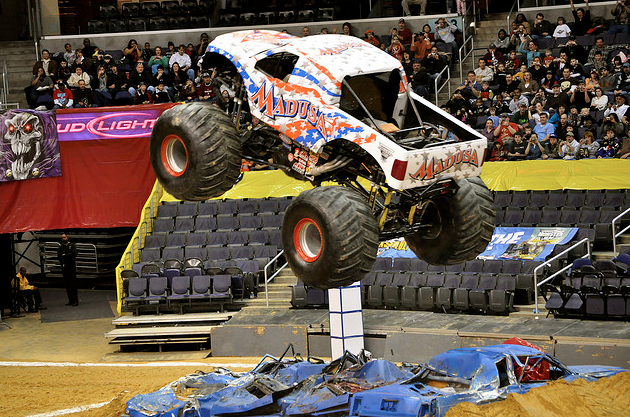 Gop Lady And The Fake Gay Marriage
There’s a Georgia Republican lady who says that as soon as gay marriage is legalized straight people are going to pretend to be gay, so they can get benefits.  Have another straight friend with better benefits?  Pretend you queer off and upgrade to Kaiser Permanente.  Honestly, isn’t the Republican symbol an elephant? I thought elephants were supposed to have good memories?  If this GOP trunk hurler had a memory at all, she’d think about all her straight friends in fake green card marriages.  Straight people have been exploiting the system for years and for the benefits of citizenship.  Get off your high elephant and stop the hysteria.  Every system gets exploited like free speech when crazy lady is allowed to talk.

Eat that, fake gay marriages. Now you are metal pancakes.

The 405 Parking Lot
They say Californians only talk about traffic.  This is mainly true.  I do NOT know where or how the ‘surfer’ image of the California came to be true because you can not get anywhere in this town without hitting that 405 and then sitting there at a dead stop for an hour.  It’s supposed to be one of the worst highways in the world.  Every time I’m on it, I dream of jet packs and the motorcycle I should purchase and I fantasize about hitting every car in front of me while soaring out of my body and into my nice, warm, bed.  I suppose I shouldn’t get hysterical, but this sh*tty system made me do it.  People worry about gay marriage and how it will lessen procreation.  I say, “GOOD.  THAT MEANS LESS CARS ON THE FECKIN’ 405!”  Balls.

Welcome to the bullshit. It’s Tehran, but still.

That Meme Fecked My Font
You know memes.  Those viral pics with words scrawled across them.  I’ll include one for your perusal below.  Well, there’s a guy that created the Impact font that’s included in most meme language.  Little did he know that he’d be the default meme font.  Question is – will we all tire of the meme font ‘till it goes the way of Comic Sans and becomes a joke all on its own?  I feel bad for people who invent something and then get screwed by it.  Someone create me a meme pic of a font designer getting eaten by his own meme font.  Too meta?  Maybe I’m hysterical.

What’s irking you today?  Let it rip in the comments section below.

Sweet Mother is updated regularly.  If you’d like to follow this blog, you can do so via email at the top right of the page.