One of the things I like to do on this blog is give advice to my future child – my gayby.  If you don’t know, this is a baby made by gays.  Now, with all the talk of bullying making the rounds and while watching this whole Rush Limbaugh/ Republican primary sh*tstorm, I thought standing up for oneself might be a good thing to teach a kid.

First and foremost, let me just say, I’m not an advocate for fist fighting or backyard wrestling or hitting yourself with a 2×4, any other such rednecky-type nonsense.  None of that appeals to me.  Hell, I don’t even like it when those urban skateboarders jump up on the rails and ride them.  All I can think is, “Man, do you really want to make mashed potatoes out of your balls at such a young age?  You might need them…”  So, I’m against violence.  I also believe that if you yell in anger, you may have the BEST point in the world, you may be so RIGHT, and yet no one will hear you.  All they will hear is the yelling.  So, whenever you can do like the kitschy, pop culture poster says – “keep calm and carry on.”

I also believe in my mother’s advice, which was always, “Never get into a fight.  But, if someone hits you first, you have the right to defend yourself.”  (Interesting that my mother’s best advice was also completely parallel to Israel’s foreign policy.  I, for one, agree with both.)

So with that take on fighting, here’s how to deal with the different experiences you might run up against, my sweet, gayby:

Fighting with a stranger
Sometimes you will walk around in the world, whistling, enjoying your day, and you will be approached by someone who could only be described as, “bat sh*t crazy”.  When this occurs, it’s best not to engage.  Just talk to the person the way you would if someone was talking to you in a foreign language you didn’t understand.  Basically, this means a lot of miming, gesturing, feigning the idea that you’re TRYING to understand, while at the same time trying to get the hell out of the situation as fast as possible.  This person is more than likely either completely high or completely mentally unstable.  Never engage them physically, unless of course they somehow get you or one of your family members in a chokehold, then hit.  Hit fast and run hard.  There is no cowardice in this – you will most likely never see this a-hole again.  For she or he will be placed in a home.

Political fighting with someone who has the opposite beliefs from you
For this one, you really have to gauge your level of intimacy with the person you’re sparring with.  For example, if you’re gay and you’re at a Christmas party for your wifesy’s work and the Christian conservative that runs the business is paying for your health insurance – when he starts to go on and on about how global warming is a fairy-tale – just nod your head “yes” and say, “You’re right, you’re right.”  If he starts to look at your through squinty eyes because your gayness betrays your liberalness – much like if you’re black, people are going to assume you will vote for Obama – well, if that happens just yell out, “Those damn polar bears!  They’re so greedy wanting all of those roomy polar ice caps for their homes!  Why can’t they just live on a small parcel of government assigned land like the inuits!  I’m sorry, sir, I meant eskimos.”  This will ensure that your receive your low cost asthma inhalers for the duration of wifesy’s employment.  Your lungs will thank you.  It is a sacrifice, but it is worth it. 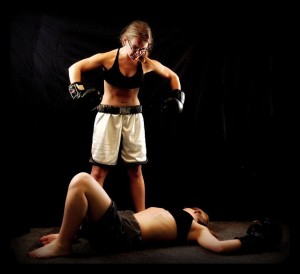 Getting into a political fight with a family member
If you’re getting into a fight with your dad or your mom and you’re about to ask them for the down payment on a new car, chances are you should keep you political leanings to yourself.  However, if you’re arguing with your father-in-law and you’re secure in your marriage and you already have a home, PUSH THE ENVELOPE.  Not so much that your wife leaves the Thanksgiving table crying, but enough that your dad-in-law knows you’re not a p*ssy and that this liberal/democratic/republican/libertarian thing is not a rash that’s going to go away.  Ultimately – meaning like maybe for a millisecond right before his death – he will respect you for it.

Political fights with your lover
If you are about to get into a political fight with your lover, then you are an idiot.  If that person is giving you sex on a regular basis then let him or her do whatever the fudge they want with their recycled cans!!  Let him or her explore their latest conspiracy theory in relation to 9-11 or the killing of JFK.  You know what really happened because it’s blindingly feckin’ obvious.  However, you’d also like to have an orgasm this week, so weigh the pros and cons and THINK before you speak.  It’s simple, Silly.

Everyday fights with your lover
There are some people who NEVER fight with their significant others.  These people are robot/ cyborg/ androids who also probably have no passion in their lives.  They live safely – always taking a shower at the same temperature and never veering of their dietary menu of chicken fingers and french fries.  In a word – BOOOOORRRRRING!!  If you have a good relationship, you’re going to fight.  The key is to take the fight just to the edge of the cliff known as, “the point of no return” – once poised on that cliff, start to laugh maniacally.  Laugh as hard and as sincerely as you can.  Throw your whole body into it.  This will save your relationship because you will look so crazy that your significant other can do nothing except laugh right along with you and silently debate how they ended up with such a lunatic.  There’s something about this mock-crazy behavior that sucks the tension right out of a fight just like a liposuction vacuum sucks the fat out of a hiney.  (Ew.)

Anyway, Gayby, always remember Dale Carnegie’s famous quote, “A man changed against his will is of the same opinion still.”  So, most of the time, you can’t change anyone’s mind.  That doesn’t mean you shouldn’t try, but it does mean you should pick your battles.  The other important thing to remember – some people are just a-holes.  It’s an unfortunate reality, but much like the surrounding dirt makes the diamonds shine brighter – the a-holes will shine a spotlight on the winners.  They’ll be easier to pick out this way, especially for someone as balanced and sane as yourself.  Well, I assume you’ll be balanced, for you will have a good teacher.  And if we ever fight, I promise to let you win – at least, every 100th time.

Sweet Mother is updated daily.  You can follow by clicking the “follow” button at the top of this blog.

If you liked this post, you might want to check out the, “Letters to My Gayby” Series.