I’m going to admit it.  I watched an Oprah, “Master Class.”  I couldn’t help it.  My vag made me do it.  It was on Ted Turner.  Ted Turner is a fascinating guy.  He’s the original founder of CNN and a master sailor among other things.  Ted said many gripping and interesting things.  One was, and I’m paraphrasing, “I used to be militaristic as a kid, my dad was in the Armed Forces.  I used to believe, it was my America – right or wrong.  But, now I’ve changed.  Now, it’s my America – RIGHT.”  What he means by that is when he feels America is wrong, he says so, and loudly.  I loved that and I believe it fully encapsulates my feelings on the country of my birth, as well.

Ted said an interesting second thing and it was this…(again, I’m paraphrasing):

“…I promise to have no more than 2 children of my own.”

Interesting.  Ted believes we are overpopulated and that we shouldn’t have as many children as possible.  We shouldn’t OCTOMOM ourselves out just because we are rich.  I believe Ted means that you should have only 2 biological children.  If you take in more children through fostering or adoption, that doesn’t apply because those children are already here.  Adopting should be a good thing.  You would think.

It all got me thinking about Josephine Baker.  Josephine was a performer (American born, but entirely French in identity) and a prominent civil rights activist.  In a lot of ways she was WAY ahead of her time.  She was also bisexual and had very known relationships with women as well as men, including one with the Mexican artist, Frida Kahlo.  Josephine also had what she called her, “rainbow tribe.”  The artist adopted 12 children – 2 girls and 10 boys, all from different countries. 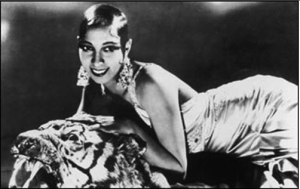 There’s only one problem.  A sort of major one.  From all I have read, Josephine didn’t really raise them.  She had a staff do so.  The children had what most would call a very neglected and odd upbringing.  Not to mention that eventually Joesphine’s finances could not withstand her monetary output and the whole happy-rainbow-castle-charade virtually collapsed.

Josephine got me thinking about Rosie O’Donnell.  Rosie only has 4 kids, but there was a moment there where the comic had moved a second girlfriend into the house next door.  In that house, the girlfriend was raising 6 kids.  That’s a whopping 10 kids total if they were all to meet for brunch.

Then there’s the Octomom.  Don’t even get me started on that horror show of a woman.  This is a mom who thinks taking a can of spray paint and painting a picture on the WALL OF YOUR HOUSE and then surrounding it with a spray-painted “square” is some kind of substitute for art.  I can’t even begin to understand the level of psychosis operating there.  Nor can I begin to understand why those children haven’t been taken the feck away from her by social services.

It all leads me to making one big, grand, sweeping, conclusion:

LADIES, GET A HOBBY.

There’s basket weaving, mountain biking, kayaking, beading bracelets, website design, gourmet cooking / canning, automotive restoration and repair, dog training, and blogging.  All of those hobbies were taken right off the top of my head, but there are many more.  And you don’t have to stretch out your vag nor ruin the childhood of another human being to engage in any of them.

She-sus Christ.  It all reminds me of the phrase, “Jack of all, master of none,” but in this case I’d change it to:  “MOTHER OF ALL, MOTHER OF NONE.”

And this sh*t goes for the Duggars too.  We get it, you’re religious.  But, if you really want to prove to me that you’re religious, completely pious, and better than me, then go and do some missionary work in godforsaken, bumfeck, no-where-land.  Feed some orphaned kids.  Build a school or a shelter.  Truth is, your building a ladder to God from your uterus by stacking your own biological kids sky high until you reach the heavens…it doesn’t impress me.  It makes me think you’re a jay-hole, which is a made up word, but sounds appropriate nonetheless.

So, let’s just say – on this point (and many others, it seems), I agree with Ted Turner.

If you want to grow something, start an organic farm.  Use the produce to feed inner city kids who usually eat nothing, but 25 cent bags of chips from the bodega washed down with purple, sugary, drinks.

Your lady parts can be used to grow many things.  I’m just not always sure it should be a kid.

As always, I welcome your thoughts.

Sweet Mother is on a daily quest to reach 365 posts.  You can subscribe to this blog, by clicking the “follow” button above.