A term has been flitting across my vision field over the last little few weeks on the internet and it is — GAYMER.  Instantly, it’s easy to see what the word means: gamers, but you know – like – gay ones.

I find this concept so interesting.  Whenever a movement gets more and more freedom and more and more traction different subgroups of that movement start to pop up.  Sometimes even unlikely ones like, “Log Cabin Republicans” or maybe even like the new world of GAYMERS.

It got me thinking about my own history with gaming.  I don’t want to date myself, but feck it – here goes…  My first video game system was a Colecovision with an Atari convertor.  So, I could play both Atari and Coleco games from one system.  My brother, who is about 5 years younger than me, graduated to a Playstation and then eventually, a Playstation 2.  I probably played the most video games that I ever have with my brother.  I think we enjoyed playing them together. 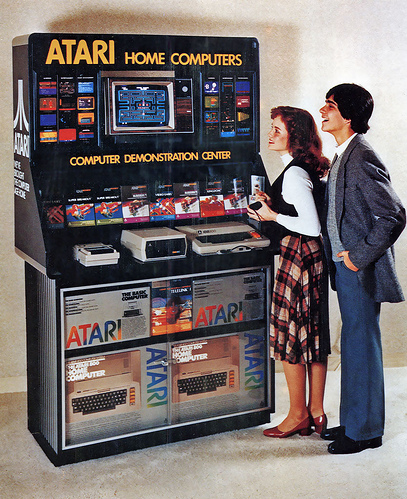 Sorry, but this was cool sh*t when it came out…

And don’t make fun of my Colecovision initiation…

I mean, for feck’s sake, when I was a kid-kid ARCADES were still around.  I spent a lot of time drilling a hole through a quarter and attaching it to a string so I could play longer.  (C’mon, you know you did that…or wanted to.)

However, my bro was of the new generation where you gamed – solely – in your house.  You built a boy-man-cave in your basement and you played.  I have a distinct memory of playing Grand Theft Auto in my parent’s basement with my brother.  That was the first time that I had seen the evolution of video games.  I was like, “What in the feck is this?  There’s like 18,000 ways you could play this thing…”  My brother walked me through some of them, as he demonstrated his absolute ease with what looked to me like NASA ground control smooshed into a handheld device.  Let’s face it, Coleco had like a (joy)stick and one button.

This creature is better at using this controller than me…

Nothing about Grand Theft Auto bothered us.  Here we were – two gaymers, I suppose – hitting the sticks (entendre noted and continuing…) in the basement of my parent’s house.  Was it violent?  Probably.  Were there any chicks in the game doing anything other then yelping and busting out of their corset tops?  Probably not.  We didn’t care.  The thing was just plain fun.

I don’t play a lot of video games right now because, quite frankly, I would completely lose my life.  I envision the movie Prime where Uma Thurman’s relationship with her much younger boyfriend goes down the toilet when she gets him a Playstation for his birthday or worse still, this intense article I read on video game addiction.  One of those things would happen to me.  I’m too competitive and I’d spend all my time trying to beat my score (or somebody else’s) and I’d stop looking for jobs.  I might even stop showering.  That would be no good.  So, I limit myself to social media and a Netflix account.  A guilty pleasure for Wifesy and I is watching an entire season of Homeland or something akin to that.

I WILL be a Wii playing grandma, just more of a ‘casual’ user version…

But, my tendencies aside, this Gaymer evolution has me fascinated.  Some industrious geeks even plan to hold a huge convention up in San Francisco this August.  I would love to go to that event and tape some interviews.  I mean the material and the sheer geekiness would be a Glogger’s (gay blogger’s…) wet dream.

I believe the rising of the Gaymer can only be a good thing for the gaming industry.  Chances are the gaymer interest (and convention) will lead to less misogynist story-lines for games or at least a mix of some that are and some that aren’t.  We also might see a more interesting hero or two.  I’m all for that.  To me, video games are stories and we ALL should be included in them.

GaymerCon has been funded and the convention is happening.  If you find this idea as interesting as I do, you might want to check out their Kickstarter video I’m posting a link to it…HERE. The geeks – or should we start calling ourselves, GAYEEKS, say it all better than I ever could.

Anyway, what about you?  What’s your gaming history?

Sweet Mother is updated daily-ish.  Only 35 posts or so before I achieve my goal of 365 consecutive posts… Join in the fun, by clicking the “follow” button at the top of this blog now.