Well, well, well, would Sweet Mother be the gay ‘ole blog that she claims to be if she didn’t pay homage to National Coming Out Day?  I think not.  So, in order to celebrate, I’ve decided to do several things this morning.  1- I will have a second cup of coffee to celebrate.  2- I just turned to the dog and said, “I’m a lesbian.”  (In her defense, she looked back and said, “I know.  What do you think I’m an idiot?)  3- I will continue to be gay, in honor of this day filled with imaginary pageantry and nothing particularly out of the ordinary.

I remembered it was coming out day simply because I have a huge fairy that lives under the bed.  He sort of looks like this:

I call him my iFairy because he’s like icalendar on your computer.  He will remind you of all gay events taking place throughout the year.  Thankfully, because of iFairy I have never missed a gay pride parade or an annual Harvey Milk celebration.

I assume that an iFairy is quite a common feature to have in one’s home.  Whatever your activist passion is, there’s an i-avatar for it.  Are you passionate about Black History Month?  The new Holocaust Memorial on Main Street?  Well, if you don’t want to forget about these things, simply download your iJudeo or your iAfro, keep ‘em under the bed, and your friends will think you are the centerpiece of the movement. 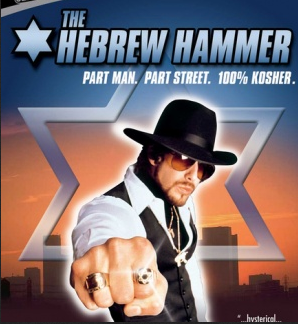 I’d convert for 5 minutes alone with the Hammer…

iFairy does all my gay-reminding and more.  I mean, there are days I come home and he has a mojito, gently shaken, and chilled, outstretched in the palm of his hand – just for me.  Suffice it to say, I love me some iFairy.

So, as I chatted with my gay fellow this morning about all things gay over pumpkin spice blend coffee from Trader Joe’s we hit upon something interesting.  iFairy slipped out from under the bed, greeted me, and “came out” to Wifesy.  Wifesy said, “I know you’re gay, iFairy, for god’s sake you’re iFairy!!  In fact, we’ve all come out -here- in this apartment.  I have to go to work.  You two, carry on with your imaginary blogging nonsense.”  iFairy looked at me as if to say, “What crawled up her stethoscope and died?”  I shrugged, “Who knows.”  iFairy and I decided to carry on our gay way.

As we sipped the pumpkin blend and chatted, we also stole glances at CNN.  Soon, a very interesting news story appeared.  It was about a Christian “heterosexual” man who decided to “play” gay for a year to see what gay people experienced.  He “came out” of this experiment (all puns intended) wholly changed and with a new found respect for gay people.  He went on to say that and I’m paraphrasing, “he had never realized how much gay people put on the line to live their lives honestly.”

This got iFairy’s wheels churning.  After looking at the Christian heterosexual man for a moment, iFairy questioned whether or not the man was actually straight.  “No, I think he’s probably straight,” I said.  “Why?” asked iFairy.  “Because he says he is,” I retorted.

And that’s really just enough, isn’t it?  I thought about all the men (and some women) over the course of my life, who I’ve thought, “No way, they are gay.”  But, yet, they live their lives as straight.  Now, some of these people are liars.  Some of them are Ted Haggarts and they are telling the world they are straight while living gay lives out of back alleys.  Clearly, I have no sympathy for them.  But, I do have sympathy for the straight man whose sexuality is called into question everyday of his life.  I know a good handful of men like this and although everyone around them has questioned their proclivities, they have lived their lives as straights.  Now, sure, they may be a small percentage of these men who actually are gay, but the thought of coming out or living against the norms of society is just far too much.  So, they have decided to push that part of themselves down, way down, Ted Haggart-style.  But, then there are the straight men who are -perhaps- a bit effeminate or sensitive or contemplative or metrosexual, but they like lady-parts as if it were their day jobs.  They are passionate about lady-parts.  What about those poor fellows?  Imagine having your straight sexuality questioned day after day after day…

And there you have it.  We are not that different at all.  At least some of us, anyway.

In fact, iFairy and I have come up with a new idea for National Coming Out Day.  For those of you who are gay, and on your way out of the closet, this day is for you…so, please, carry on.  But, for the straights who think – ah – what the feck, that day is for the gays!  I say no.

Come out about anything.

Tell your next cab driver that you have a foot fetish.

Tell your co-worker that nothing gets you going more than the knobs on the mannequin in the Macy’s window.

Let your parents know that your entire life you’ve never enjoyed their chicken soufflé.  You’ve always hated it and it’s about time they knew.  Not only that, you are refusing to eat it, ever again.  Because no matter what they do, they can not make you enjoy chicken soufflé!

Let your priest know that you use birth control.

Tell your rabbi about your bacon habit.
Tell a neighbor about how much you enjoy the roundness of your husband’s right flank.  You love it so much that if you don’t rub it 3 times each morning like Aladdin, you just can’t start the day.

Come out about something.  Tell a truth.  If it’s an interesting little sexual quirk, all the better.

Do that and for one, brief, moment in time – we will ALL understand what this “Coming Out” is all about.