Wifesy loves watching me perform.  I mean she LOVES it.  She accompanies me anytime she’s not working.  Now, I can’t tell you how rare this is for the significant other of a performer.  Time and again, spouses of comedians stop coming around when the comedy career thing gets old or when they see one too many bad comedy shows.  It helps that Wifesy loves comedy.  Sure.  But, I think she also just likes watching me, if I can toot my own horn for a sec.

When it comes to the blog, Wifesy thinks a bit differently.  She loves that I write.  She loves most of what I write.  Though, she has no problem telling me when she doesn’t.  This is one of the many reasons that I love her.  She doesn’t tip toe around the truth and I’m very grateful for it.

However, It’s when I write about her in a blog post that things ring a bit different to her.  This surprises me because when I talk about her on stage she LOVES it.  But, in the blog she says things like, “You always make me sound like a Jack-hole.”  Okay, she didn’t say “jack-hole,” I did.  She said something more like a-hole.

So, let me make this abundantly clear for the gaggles of people who read or don’t read this blog – I DO NOT THINK THIS WOMAN IS AN A-HOLE.  I don’t even think she ever sounds like an a-hole.  I simply think she sounds hilarious and adorable, even when she’s angry.  That doesn’t mean I don’t take her seriously.  It simply means she always makes me smile.

She is my joy.

And, I’m gonna say it… the wind beneath my wings.

I think this is a never ending problem for writers.  When you write, 9 times out of 10 you’re going to write about the ones you love.

What always makes me laugh is when I meet a stranger or a new friend and they say something like, “Are you going to put this in your act?  Don’t put this in your act.  Are you going to talk about me in your act?”  All I can think is, “Jesus, get over yourself.”  For me, I have to care about you a great deal for you to make it repeatedly into my act or on to my blog.  So, no, “guy at bar” – I’m not going to talk about you.  Sheesh. 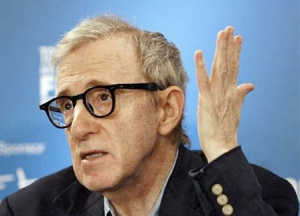 Do you think this guy has this particular problem?

Let’s talk, Woody Allen.  Woody Allen, we all know, was married to Mia Farrow.  During that period, he wrote, “Hannah and Her Sisters.”  I can’t help, but think at least some of that material must have been culled from their relationship.  A lot of it is NOT pretty stuff.  But, let’s face it.  Woody Allen is not that compassionate of a guy.  In fact, I KNOW that I am way more compassionate.  How do I know?  Well, for one, I would never marry my Asian, step daughter.

So, do not worry Wifesy.  I think of you as nothing, but a sweet, angel, bird and I will never attempt to marry any of our adopted children.  To prove my devotion, here are snippets of hilarious, charming, and definitely non-jack-hole things that my wonderful Wifesy has said:

During a morning pep talk from me on a cold, Scottish, morning:

Wifesy:  (groggily)  Oh, are we doing that today?

When my own mother constantly berates me to whoever will listen, slowly chipping away at my resolve to NOT put her into a nursing home:

Wifesy’s response:  “Sorry, that’s not my experience of Sweet Mother.  I find her to be, sweet.”

While on vacation:  Wifesy carried around these individual vitamin packets for both of us to take in-between cocktails.  After pulling a pack out of her purse and placing it on the table in front of the waitress…

Waitress:  “That would be very large for a condom.”

The waitress left confused, while I couldn’t stop laughing.

Me:  It’s hotter than a witch’s twat tonight.

Basically, it was beautiful.

And, lastly, one of the most awesome, funny, and brave moments from my lady in shining armor…

We were in a club.  Everyone was drunk.  Wifesy and I were dancing together and a drunk guy comes over.  He grabs my ass and flicks her boob.  The guy must’ve been 6’5” (metric people, read:  very tall).  Wifesy is shorter and smaller than me.  She grabbed the guy, by the hair, and pulled him down to her level.  Then she reprimanded him in the coolest and hottest display of awesome I have ever seen.  She wagged her finger in his face and said, “No.  No!”

Just like that.  Like you would do to an untrained puppy.  As I held my breath and watched, he walked away.  That was it.  Chastised, he simply left.

We had the best make-out after that one.  We’re still making-out, thank god, and I hope we will do so for the rest of forever.

I love you, Wifesy.  To me, you are the sweetest thing.

Sweet Mother is updated daily.  You can follow this blog by clicking the ‘follow’ button at the top of the page.

My version of a travel blog