This is not my first time at the blog-rodeo.  Well, it is, but yet, it isn’t.  This is my FIRST creative writing blog.  I had another blog before this where I talked about comedy, nothing, but comedy.  It was an advice blog – an advice blog for comedians and other people in the ‘arts’.  Here’s what I did WRONG there:

I did NOT love it.  The blog was tied to a show that made a good amount of money.  At one point, a lot of money.  I basically booked the pre-professional shows at a couple of clubs in New York.  The ‘real’ show would start at 8, but the show at 7 was all mine.  At the time, there were 17 comedy clubs in New York and they compete fiercely for audience.  That’s why these pre-professional shows exist.  If you’ve ever been to New York, you only need to walk through Times Square and you will be accosted by several young people wearing sandwich boards trying to get you to attend a show at a comedy club.  The clubs have exorbitant rents in order to keep their doors open, so the owners want their rooms filled as much as possible.  For the pre-professional shows, the comedians have to bring people.  I could go on and on about how this has ruined comedy, but that’s for another post entirely.  However, it’s not the only industry that does it – any new band is going to have to bring in the entire audience when they get booked at a club.  Any newer art gallery showing or opening, the same thing occurs.  I eventually started booking these shows because the guys that were doing it were making a lot of money and what upset me even more was that almost NONE of them were comedians.  I thought – if these shows exist and will exist regardless of whether or not I hate them – AT LEAST some of the money should be going back into the pockets of comedians.  That’s when I got into it.  At various points I made very little money doing it and at other points I made a great deal.  Regardless, I always paid the comedians who helped to run the show – WELL.  I paid them very well.  Sometimes even more than myself.  I tried to treat them well, too.  The same holds true for the newbie comics who were bringing the audience.  Every other pre-show booker, in my humble opinion, treated new comics like cattle and horribly behaved cattle at that.  I tried not to do so.  However, it wasn’t always possible because a new comedian can be a great person who just wants to try out something creative or they can be a raving narcissist who thinks that they were born to be famous.  The raving narcissist comedians feels, “Give me only five minutes on stage and the world will be transformed.”  The truth is, it never is.  Even if the new comedian isn’t half bad.  The world just goes on. 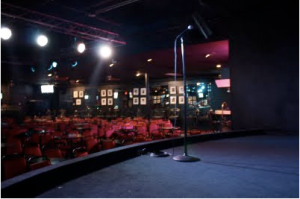 This forum might be completely dead for introducing new comedy acts. Have the blog and other online platforms replaced it? I'm not sure.

So, needless to say, I hated it.  I hated that show running experience and consequently hated the advice blog.  Some of these comedians who read the advice blog were the biggest takers out there.  Not all of them, of course, but enough to make an impact on me and my spirit.  Now, why would I say something like, “me and my spirit”?  Who am I?  Anthony Robbins?  I’ll explain.  Because when you’re blogging, your spirit has to shine and be well cared for.  Your passion has to remain intact and uninjured.  You’re doing it for free and it takes a lot of initiative, persistence, and energy.  If your spirit keeps getting chipped away at, you ARE going to give it up.

That’s why I hated my original blog.  I created it as a companion piece to something I didn’t really like.  I created it for an audience that I didn’t want to hang out with.

It was also a tech nightmare.  I created the blog on wordpress.org, which if you don’t know means that I created the blog from scratch.  Every sidebar, every image, I had to essentially design and code myself.  I’m amateurish at design and coding in the best of times.  My strength is in my writing.  That’s a huge lesson right there – PLAY TO YOUR STRENGTHS.

When I left the old blog and started this new one, many months later, I did a couple of things.  I educated myself.  I read everything I could on or about blogging.  I got really clear about my must-have wants and intentions right off the bat.  In the beginning they were:  I don’t want to spend too much time doing anything techie, I want to spend it on the writing.  I want feedback.  I also want feedback from people who do NOT know me and my comedy.  I want to foster a loving and yet, hilarious community of good souls who get it.  It was that simple.  Not much more thought out than that.

Everything on blogging is just a google search away. And if you want to blog well, you've got to educate yourself.

So, how did that all manifest, here, on Sweet Mother?  Well, when I say that I wanted to attract a certain kind of person, here, I never sat down and created a list of traits that would make up my perfect reader.  That’s not it at all.  It’s that I always wrote with a specific intention.  I do not like the “darker” side of the internet – the side that harasses children (and adults) with abusive and trolling comments, hate speech, and a “gain followers at all costs” sort of mentality.  I DO believe you can be mind-blowingly funny while also “doing no harm.”  Maybe because Wifesy is a doctor for little furry things that I’m such a lover of the hippocratic oath – “do no harm.”  I think I have learned to internalize that as a strategy for all my internet presences.  That doesn’t mean I’m never scathing.  I like to scathe (can I say that?) when it’s justified.  There are many people who should be both scathed and then filleted.  Am I someone who should judge who and when?  Yes.  At least in this space, Oh Lord, YEEES.

I think that’s why my Sweet Mother character has been so important.  We all know what a good mom is.  It’s a universal.  She loves you with so much love that you didn’t know it was possible to be loved so, but send a pit-bull into the path of her child and bear witness to the same woman transformed into hellfire incarnate.  There is a facet of this that is so truly and so totally me.  The real me.  I think that authenticity is so completely important when writing online.  So, if the character is not you, there must be an element of it that IS or people will feel the falseness.

I also like a good party.  I read somewhere once that your comments section, on a good blog, should “feel like a party”.  The one here, on Sweet Mother, DOES.  The one on my old blog, not as much.  I delight in reading the comments here EVERYDAY.  I delight in it.  That means that I’m doing something right.  And I’m no genius.  You can do this too.

I don’t think I’ve magically created this party here, but I do think it continues because of the character I’ve created, the intent with which I write, and the reality that those who are here understand that I will “DO NO HARM”.  I also won’t really tolerate doing harm to others.  I think on some level, my readers must understand that about me.  I think on some level, you all must be the same.  Am I right?

Sweet Mother is updated daily.  If you’d like to follow this blog, you can do so by clicking the “follow” button at the top right of this page.

Internet Acronyms That Should Be, But Aren’t

Why Did You Unfollow Me Today?