“Wow, who would’ve thought that the package waiting for us would’ve been a macrame picture made for me, by your mom?” said Wifesy.

“Embroidery,” I said.  “It’s an embroidery or a needlepoint.  Something like that.  Macrame is that knotted, white, ropey-looking stuff that kids wear as bracelets during the summer.  Especially, if they’re hanging out down by the shore.”

This back and forth says a lot about Wifesy and me.  We’re not embroidery people.  She’s an ex-rocker and I’m a sometime comedian.  We’re not artsy craftsy.  We don’t make mugs at a class that culminates in our painted clay going into a kiln.  We don’t do shrinky-dinks or bedazzling or beading.  I’m not that into wind chimes and Wifesy hates potpourri.  We do have candles – all over the place.  We are the owners of two vaginas, after all.  However, we do not make them.  I draw the line at making things.  I am not the type of woman you would ever find at some kind of “Stitch and Bitch” class even in an ironic sense.

My mother, on the other hand, is craftsy.  She’s always been.  She crochets.  Every new baby in the family gets some kind of crocheted blanket or onsie or sweater.  I swear to god, if my mother could make an adult-sized, jumper-onsie for my brother and I, she would do it.  I always remember my mother either crocheting or making an embroidery as she watched tv.  And as my father would attest there are handmade ceramic things all over the house. 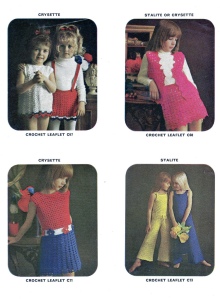 These could be pictures of my childhood, only less fancy.

“No, we definitely have to hang it up,” said Wifesy.  “The question is where.”

Now, you see, there is something heartbreaking about my Latina, Catholic mother sending my gay lover a handmade embroidery.  And it’s very specifically tailored to Wifesy.  It’s some kind of veterinarian pattern – so she picked it out with Wifesy in mind.  The picture is broken up into quadrants – one contains a dog, the other a cat, there’s a syringe at the bottom, and a thermometer that runs up the side towards a name placard.  The name placard says, “Dr. Wifesy”.  There was also a mystery quadrant. 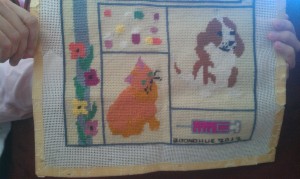 And this made me laugh, I suppose doctors see bacteria in everything.  A Jackson Pollock – what are those DNA strands?  Bacteria?  Is that an amoeba?  Instead of seeing the Virgin Mary in a cinnamon bun they see a colony of triglycerides.  Science-people.  This is what I’m surrounded by.

“No, those are pills,” I said.  And sure enough, that’s what they were.  A little quadrant filled with pills.

Before we get all Oprah-moment here – each one of us crying about the beauty of the mother – daughter relationship, let me explain something to you about my mother.

Yes, she made this out of love.  Yes, she’s opening up to my wifesy.  Yes, that’s a major step for her – being accepting AT ALL of my “alternative” relationship.  However, I know my mother.  I know my mother well and there’s also something devilish in it.

She wants an embroidery up in my house.  Period.  And there is no stopping my mother when she wants something.

When we were little my mother used to get us these sweaters.  You see, she’s Colombian and she used to get me these sweaters that are only ever worn by the Colombian indigenous people as they encourage a pack mule carrying two sacks of coffee up the mountain side.  The sweaters tied around the waist and had hieroglyphic looking scenes on them of mules and mountains and jungles and women in traditional dress.  Now, there’s – of course – something wonderful about that.  There’s something wonderful about my mother holding on to this sense of tradition.  But, there was something not so wonderful about her forcing me to wear my quasi-Mexican-Colombian-Sweater-Poncho to the first day of the seventh grade.  You have to understand, even though we have a similar bloodline, I do NOT look AT ALL like Sofia Vergara.  I look more like Sally Fields when she was young or Jared Leto’s gay sister, someone told me once.  Basically, I have a very Irish-looking face due to my Irish-American father.  So, picture a younger sister to Colin Ferguson showing up at New York school wrapped up in what seems to ignorant, young, Americans to be a full-length Mexican shawl.  I think the children called me “Irish taco” for two days.  But, my mother didn’t care, she liked that sweater and I would wear it, g*ddamn it.  And if she made the thing, forget it.  You’d wear it – in front of her – everyday, until you were in your grave.  That’s the force that is my mother.

So, now we’ve got this embroidery thingie and we’re deciding where to put it.  I can see the Christmas-future in it.  Today, we’ll have one embroidery on our wall.  Tomorrow, we’ll have an entire roomed filled with them – sort of like that scene in The Girl with the Dragon Tattoo where Herr Vanger has an attic full of matted flowers that “someone” has been sending to him every year on his birthday.  They’ve been sending him these flowers, just to torture him.

But, we’ll deal with it.  Because my mom did make it out of love.  And slowly Mom is dealing with Wifesy and me and our gay-reality – in her own embroidered, artsy-craftsy way.  That, to me, is worth a dedicated room or two.