So, I received an email early in the week saying, “Congrats, You’ve been freshly pressed!”  The email said my post would go up on the wordpress.com homepage in the next “day or two.”  It was indeed “two” days.  My post went up (I believe…because all the days of this week are currently blending together) on Tuesday at about 3pm, by Wednesday at 3pm, it was on page 2.

I’m only giving out this information in a post because most of you that read this blog are part of the wordpress community and have either been Freshly Pressed yourselves or are looking to be.

I believe my piece was “pressed” for a couple of reasons:

** It was universal and had a universal appeal.  It was about the Olympics and the amputee, Olympian, Oscar Pistorius.

** It was somewhat provocative in a way that asked for debate.  In other words, I was asking some questions.  Those questions were – was it fair that Oscar was allowed to compete?  And along those lines, would it be fair to allow a trans-athlete to compete?  Say, a woman born a man, who transitions into a woman, would it be fair to let her compete with other women?  It inspired a lot of debate. 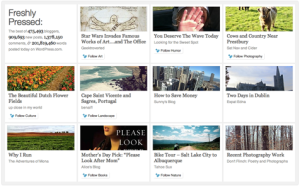 Now, this is not the first time I’ve been “Freshly Pressed” and I say that gratefully.  I’m always happy when wordpress throws my piece on to the homepage because regardless it will be boon in traffic.  But, since I’ve now been “pressed” twice, let’s talk numbers:

Here are the numbers for my first piece that was pressed, called, “Did My Post Suck Today” and this is only on the very first day it was viewed:

That’s the actual number for the day.

When my second piece was pressed, “How Oscar Pistorius Makes You Feel Inadequate,” here are the numbers for the first day:

So, why the difference?  I think there are a couple of reasons.  “Did My Post Suck Today” was HUGELY universal.  It was even far more universal than the Oscar Pistorius piece.  It applied to every blogger out there in the wordpress community.  I do not remember what it was tagged under, but the Oscar piece was tagged under “gay,” probably due to my trans-athlete reference.  I’m betting that may have discouraged some people from reading it.  Did My Post Suck was also really funny and the Oscar piece while playful, still had a more serious tone.  It’s also about when wordpress puts your piece up and for how long.  As I recall the first FP’d piece went up and stayed up on the homepage for several days before moving to the second page.  It was also in the “number one” spot for a while.  Meaning, it was the first fp’d piece you saw when you clicked on freshly pressed.

Basically, there are a lot of different factors that come into play when your piece gets “freshly pressed.”  Regardless, it’s always a boost in traffic.  My numbers for the summer before the Oscar piece were in the 250 views range and the 1,000+ views day definitely helped.  Plus, it helps in getting followers/ subscribers.  Now, keeping them is a whole other matter entirely, but at least it helps you get people to press that illusive “follow” button.

I also believe wordpress has started a new “mailer” called, “The Best of X-Month’s Freshly Pressed.”  (The Best of July, Best of August, etc.)  I’m curious if anyone has read that wordpress post/ mailer or if anyone has been included in it, as that may also help in terms of viewership.

I know a bunch of my stellar blogger-followers out there have also been Freshly Pressed once or more than once.  If you have been, what’s your experience of it?  And if you haven’t been, do you want to be?  I think there are some very good reasons not to want the “freshly pressed” feature for your blog, as well.  Let me know your thoughts.

Anyway, this is all a learning process and I MUST say that I 100% believe wordpress is the place for writers.  Tumblr seems to have a “tumblr radar” (their version of “freshly pressed”) and I can’t, for the life of me, figure it out.  So, the blogosphere may be talking tumblr, but I firmly believe if you are or want to be a writer, you need to go with wordpress.  What do you think?

Sweet Mother is updated daily.  If you’d like to receive an email with new content, simply press that “follow” link at the top of the blog.  A note to my commenters…I know I’ve been a touch remiss about commenting back lately.  Trust that now my freelance gig has come to an end, I’ll be able to chat with you more.  Why?  ‘Cause I love you.