I have this love / hate relationship with social media.  There are times that I hate it.  Back when Myspace was big, the biggest joy that I received from it was deleting the thing.  At first it was fun, but then it got to the point where you needed a graphic designer to trip out your page and I just wasn’t willing to go there.  Other times, I love all things social media.  There have been periods where it has forced me to be creative.  For example, for a while, after I almost got a job writing pop culture jokes for a celebrity, I said, “I should keep this joke writing thing up.”  So, I started a dedicated twitter feed for pop culture jokes.  I posted 3 to 4 a day and wrote far more of them than that.  On twitter, the short joke works.  People like them.  At another time, I was more focused on what I would call, “curating” my facebook page.  I would post incredibly interesting content usually that I had not produced in any way.  If I saw an amazing video say of a violinist re-doing lady gaga or an intriguing long form magazine piece on an adult man addicted to gaming – I’d post links to them on my feed.  The only requirement was that the content had to be good.  As a result, people were always coming by and saying things like, “Your facebook page is so interesting.” 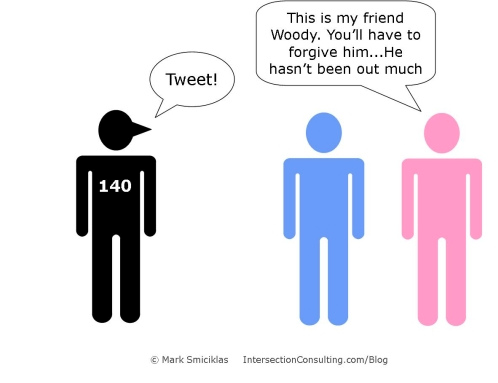 A useful tool, but remember you still have to TALK to people…

But, since my creative process can be kind of cyclical, that kind of curating also came to an end.  Over the last 7 months or so I’ve done one thing and one thing only – I’ve promoted my blog to my social media platforms.  And it works.  I get readers, a lot of them, from outside of WordPress.

Regardless, I’m not totally happy with my current social media usage.  See, this is the second part of the hate part.  I find my facebook page -at the moment- to be a bit of a static (read – dead) space and I’m on this kick to re-vamp it.

There are the two fbs I currently work with:  a main and a second page.  (links provided below.)

As I see it, there are a couple of problems with my main page currently.

A)  It’s clogged with garbage.  Comedians are comedian collectors on social media sites.  So, if you are a comedian and another comedian sees you pop up in their people to add section, they will add you, whether they know you or not.  In some ways that can make for a cool sense of community.  The problem is most comedians only want to add you so they can promote their own sh*t.  This means – very little interaction.

My solution — I’m going to delete every comedian that I don’t know in some way, haven’t met personally, don’t know their work, or who hasn’t interacted with my page in a while.  I’m also going to delete all dead accounts (people who have left facebook, clearly, but their social profile still exists in the ether).  And lastly, if I don’t know the person and if the page is just not stuff I’m interested in, it goes.  Now, I’ll probably lose a bunch of “fans” who have seen me at shows this way, BUT the cool thing is that when you ‘unfriend’ it usually still allows the people to see your updates if they are ‘subscribed’.  So, it shouldn’t be much of a loss.  Plus, I have a bunch of ‘requests’ waiting in the queue.  All in all, I think it’s the best new angle to take.

B)  My content needs to evolve.  That’s step two.  I love promo’ing my blog, but -as they say- variety is the spice of life.  So, I want there to be time for curated content, a joke here and there, and my blog pieces.  Plus, an insight or two on the sandwich I’m eating at the moment.  Why not?  That’s interesting content, right?

I see the current “timeline” (or whatever it’s called) feature of facebook as a problem.  Even when I look at my own page, I find it more difficult to find things than I once did.

Solution – there’s not much I can do about that, when facebook changes something you kind of just have to go with the flow.  Mark Zuckerberg has us all by the cyber-balls, quite frankly.  But, knowing a problem exists is a good thing in terms of figuring out when and where to post.

C)  Lastly…My feed needs a scrubbing.  Lots of times, Wifesy will say to me, “Did you see so and so is doing so and so.”  And I’ve usually never seen it because my feed is so clogged with nonsense that I don’t get to see the ‘friends’ that I’d like to see more of.  In other words, there’s too much quantity and not enough quality.

Solution — cleaning up my ‘friends’ section should do that.

As far as the other social profiles that I update regularly – I use linkedin, 2 twitter accounts (1 & 2), 2 facebooks (a main and an auxiliary profile), and every now and again, Pinterest.  I think (for my purposes anyway) it’s easier and more productive to “collect” people on twitter, but I find it just clogs the system on facebook.

Add me, people, you just may see your blog promo’ed across these platforms…

I also use hootlet to “schedule” tweets.  So, I may not be tweeting right at the moment you see the tweet.  It might be something that I scheduled to post hours ago.

With all of that said, I’m going to start doing some different stuff as far as my “Reggie” section and promoting other blogs.  So, keep commenting and stay tuned because YOU aren’t going to have to do a thing to get your blog talked about…other than visit me.

What about all of you?  What’s your social media “routine” like?

Sweet Mother is updated daily-ish on a mad quest to 365 posts.  Click the follow button at the top of the page to receive an email when new content is published.

What Bothers You (And your characters…)