I fought with the title of this post.  I thought about calling it, “I See Dead Owners” or “I See Dead Parents.”  Let me explain.  The Wifesy and I did something extremely impulsive.  We saw this pic on facebook: 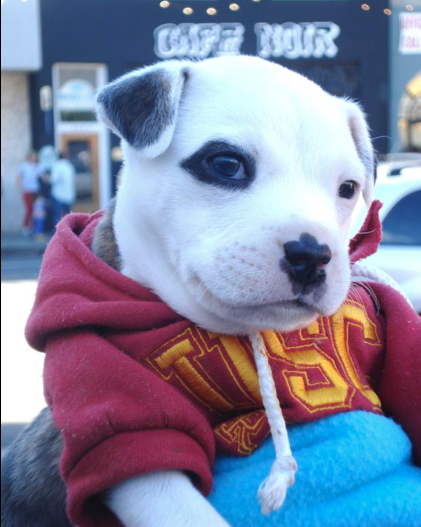 And then we immediately ran out and adopted the little thing.  It’s like our vaggy, lady, raise-something, parts were immediately attracted to it.  Okay to him.  I say “it,” so you can understand that I have a healthy relationship with dogs.  I do not think of “it” / “him” as my child.

I’m not going to enroll him in a magnate school or anything, not that he couldn’t get it, after all he’s smart as feck…but, I won’t do it.  ‘Cause I know.  I know that they are animals and not four-legged peeps.

Regardless, I’m shocked at how much raising a pup (I’ve never done it before.  I’ve only had older dogs) makes me feel like a parent.

I worry about everything.  Mostly, I think am I doing it right?  That’s what I mean by, “I See Dead Parents.”  I look at my pup and I think about doing something wrong and that doing something wrong leading to my pup being an adult terrorist.  That would make me off myself.  Okay, not totally off myself, but it would make me really, really regret it.

Parents must feel like this all the feckin’ time.  I don’t know how they do it.

I’ve read all the books, but the advice is conflicting.

Little Cash (the pup’s name) nips.  Puppies nip.  But, in my humble opinion, you want to try and stop it.  I’ve read “put ‘em on their backs and make them submissive.”  Then I read something else that said, “don’t put them on their backs.  It confuses them completely.”  Then I read, “isolate them, but don’t scold unless the bite hurts.  But, if the bite really hurts, then scold loudly.”

I try everything and I try everything multiple times.  I’m not saying I’m neurotic.  Alright, I feckin’ am.  I’M THE WOODY ALLEN OF DOG RAISING, GODDERMN IT.  AND IF THIS ALL DOESN’T WORK OUT, THE STRESS IS GOING TO LEAD TO ME HAVING AN AFFAIR WITH MY ADOPTED ASIAN DAUGHTER!!  Wait, what the feck.  That’s not what I mean at all.  Back to the subject at hand…

I even read a puppy training article that said, “If the puppy is nipping or lunging and you don’t like it (I don’t) GROWL.  Growl like you’re the pup’s mom – low and guttural.  They recognize this and it will stop them in their tracks.”

So, now I’m growling like a feckin’ idiot in my own house.  If anyone were to see me doing it I’m sure they would think I was the first victim in the impending zombie apocalypse.  Look, sweetie, that woman…she’s got the “rage disease.”  She’s barking and foaming at the mouth. 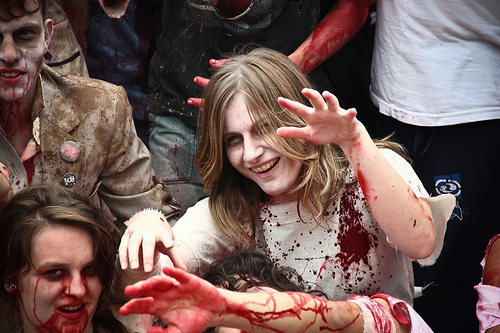 Just puppy training…no cause for alarm…

Sigh.  It is truly difficult to know the right thing to do.

Alright, maybe he wouldn’t.  After all, I’ve had him about 3 days and he can walk on a leash, sit, and come when I call him.  That’s not bad for a 7 week old.  He’s also nipping less.

Here’s how I’m going to start to focus that thinking:  “I’m going to raise a healthy and balanced American bulldog.  He’s going to run and catch and play and listen to my commands 99% of the time.  Some of it will be out of my control, but what I can control I will.” 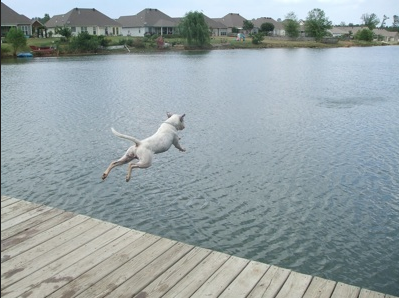 Really, that’s all anyone can do.

Hats off to you, parents.  The human version must be the biggest challenge of one’s life.

Sweet Mother is updated daily-ish.  If you’d like to follow this blog, you can do so by clicking the “follow” button  at the top of the page.