As we enter the modern age, as women gain more and more rights, as gay marriage becomes something that clearly must pass…as all of these things come to the forefront, one thing remains:

MEN AND WOMEN NEED EACH OTHER.

MEN AND WOMEN MUST RESPECT EACH OTHER.

Women (and girls) must be taught that a) they can NOT handle alcohol in the same way that men can.  (This is pure fact.  Women LACK an enzyme in their stomachs that breaks down the booze before it hits the blood stream.  Men possess this enzyme.  Women do not.  So, it goes straight to the blood stream.  Same holds true for Asian people, across the genders.  That means – you can take a fat woman and a skinny man and the fat woman will get drunk way quicker than the man, regardless of weight.)  b) they are (women) the -physically- weaker sex.  c) women (and girls) can NOT stand by when they see another woman in trouble. d) protect yourself.  By every means necessary, protect yourself.

Men (and boys) must be taught that a) it’s not cool to just sit and watch as another dude who thinks he’s cool VIOLATES a girl.  b) INTERVENE.  Feckin’ intervene.  If you’re worried about your own safety or having to fight a guy, take your cell phone, walk a block away and anonymously CALL THE POLICE.  c) be your own man.  Don’t just listen to what the cool a**hole says.  Because the cool a**hole is probably only going to be cool in high school.  After that, he may just be pumping gas.  Trust me.  I’ve seen the cool kid become the gas station attendant.  d) the powerful should NEVER abuse their power over the less powerful.

Here’s why I’m talking about all of this.  Steubenville, Ohio.  I’ve been following this disturbing story for quite a while, but have refrained from commenting on it until reading the conclusion.  If you don’t know the story, it -unfortunately- goes like this.  Two teenage boys, both star, high school football players attend a party.  At this party was a VERY drunk, 16 year old girl.  Over the course of the night these boys took control of the very drunk girl and paraded her from party to party, raping her, and documenting it along the way.  (Lovely, I know.)  They posted pictures to social media, they made youtube videos describing the girl as “deader than O.J.’s girl” and lovely additional commentary like “she’s so raped.” 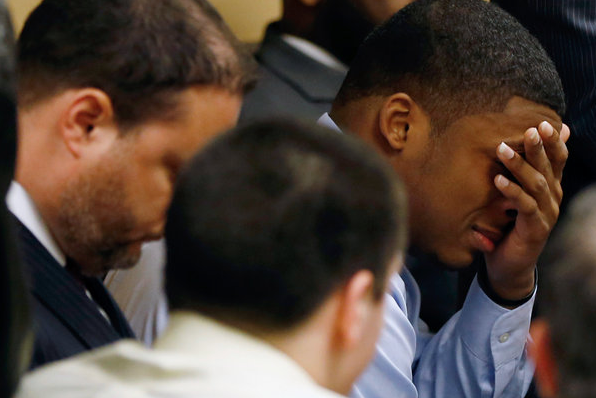 Now, you might say, “Wow, I can’t believe they were stupid enough to post that sh*t.”  I say, “Thank god.”  Because something like this prior to our obsession with social media would’ve been reduced to a “he said, she said” story and they probably would’ve got off.  However, through the boys’ unbelievable text messages and picture postings and videos, the defense was able to put together a timeline of what truly happened that night.  That along with witness testimony convicted these two boys.  They will go to juvenile  jail until they are 21.  Frankly, I’m not sure that’s long enough.

The social media postings were important because the girl couldn’t remember a thing from what happened that night.  She was blackout drunk.

There are many troubling things about this story for me.  But, to name a few…

+  there were many witnesses, yet none of them intervened to help this poor girl.  this goes right back to my post about “teaching your kids to be nosy.  teach them to intervene.”  it’s the only way to stop this sh*t!  it is NOT okay to stand by and do nothing because “it’s not your problem.”

+  it took a while for the football boys to even understand they had done something wrong.  eventually the boys apologized.  eventually.  and i think they meant it once they did.  however, when the news of the rape first broke.  the lead aggressor in this case said via text (again), “i don’t know why i’m being blamed here.  after all, i was HELPING you that night.  i should be thanked.”  that from a boy/ man who many witnesses said digitally penetrated a completely passed out girl, took photos of it, AND -days later- bragged about it.

Let’s take a moment on that one.  WHO IN THE FECK TAUGHT THIS BOY ABOUT WOMEN??!! WHO?  THE ABILITY TO LACK ANY KIND OF EMPATHY FOR ANOTHER HUMAN BEING IS A SURE SIGN OF A PSYCHO AT THE VERY LEAST.  Yet, this is clearly a gender motivated thing.  Somewhere this kid got the message that women are possessions and you can do whatever in the feck you want with them.

Honestly, have we learned nothing from Penn State?

+  out of all the witnesses, one girl – ONE GIRL – tried to get the victim to leave.  ONE GIRL.  well, someone give her a medal of honor for doing what everyone else should’ve feckin’ done.  the girls “friends” did nothing.  because they had “a falling out with her” and because sometimes the victim “lies.”  ATTENTION:  girls, GET OVER YOUR FECKIN’ SELVES.  GET OVER YOUR HIGH SCHOOL BULLSHIT AND HELP SOMEONE WHO IS WAY BEYOND THE POINT OF DEFENDING HERSELF.  Help someone who is clearly in danger of experiencing the one BIGGEST fear that EVERY woman has.  For god’s sake, THINK.  THINK FOR YOURSELF.

What troubles me is that I have known boys like the above and girls who wouldn’t do anything out of fear and cattiness.  I have heard women talked about in horrible ways by men.  Hell, at times, I’ve been one of them.  Thank god, I DID have good female friends that would’ve drawn a line at me being passed out drunk and passed around.  Thank god, I would’ve done the same.  Thank god, even at that young age, we had a stinking feeling of when something went way past the line of high school bullsh*t and into “oh my god, they may never recover from that” territory.

I don’t know if these were boys who truly fucked up (because fecked seems too light of a sentiment right now) …boys who fucked up trying to be the cool kids or if they are truly psychopaths devoid of any feeling.

All I know is that I have seen -many times- men who behave like this.  I have seen these guys – men who can be described only as, men who hate women.

The trouble is… what do we do about them?

Sweet Mother is updated daily-ish on the quest to 365 consecutive posts.  If you’d like to follow this blog, you can do so by clicking the “follow” button at the top, right of the page.