Today is a strange day.  I have a case of the hormonies.  After giving my poor, Wifesy, an ear full about how I’m fat and why do I need to be thin?  Is it the triteness and glamour of Los Angeles that is forcing me to try and be so?  Because if that’s the reason, I ain’t doing it.  Is it some kind of crazy, keeping up with the Joneses kind of thing?  Because if that’s the reason, I don’t give a rat’s behind.

Wifesy, said, “No.”  Then she went on to say some very on point things about my past and how I won’t deal with it because of my mom, much like I don’t want to completely deal with my finances because of my dad.  She’s good this Wifesy.  Part brilliant doc, part supercool woman, exceptional human being, part Dr. Feckin’ Phil.  And she is right.  I have to deal with some of this stuff.  And when it’s for the right reasons, I will deal with it.

So, right now, I’m sitting backstage at the International Ballroom of the Beverly Hills Hilton.  This is the exact spot where they film the Golden Globes every year.  Tonight (and today) I’ll be working with the teleprompter person to make sure they get our script right. 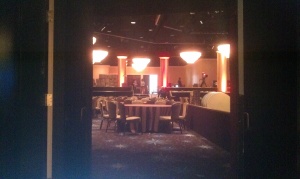 I say “OUR” because a lot of my jokes either didn’t make it in or were watered down by the powers that be before the script was finalized.  It’s all a very interesting process and I’ve learned a few important things that I will undoubtedly be absorbing and trying to understand.  In the future, there must be a happy place between a writer’s creativity and the final product.  At least, I’d like to try and find it.  I’ve also learned a few things about writer to producer relationships.  Here are a few of my thoughts:

1.  There is a right way and a wrong way to give a writer “notes.”  For one, notes should be given with suggestions and directions for how to proceed.  A note such as “change that” with no accompanying guidelines for what you want the end result to be is not all that helpful.  Sure, a good writer can come up with 100 different versions of something, but if you know what you want, just say it.  It speeds the entire process up.  Of course, if you don’t know what you want, the writer is going to go through the process of coming up with a dozen different versions until they get closer and closer to the one you want.

2.  A writer has opinions.  Within each creative version, you will see their opinions.  Of course, they’ve written it because they like it.  If you want to change it, that’s fine, when you’re signing the check, but don’t get upset with a writer for their creative opinion.

3.  I, personally, am not the best at dealing with things that are “huffed” at me or said with aggression.  This has happened to me many different times with many different bosses at all kinds of levels on the food chain.  For some reason, things get huffed at me, under stress, and then later I’m told that I’m doing, “a very good job.”  I need to learn how to deal with this better.  There’s no way I can change how other people deal with stress, but I need to find a way where if they are on fire, I don’t have to take on the flames myself.  You know what I mean, it’s better to help someone – stop, drop, and roll – then put out their flames by setting yourself ablaze.

So, that’s been my day so far.  Dealing with my own issues in life and in work.  Dr. Freud would be proud.

And Hey, as always – if you, awesome reader, out there, have any ideas as to how NOT to take on the stress of others, I’m all ears.

I’ve Still Got It