LTMG stands for “Letters to My Gayby” – an advice series for my future child.

In the winter of the year 2012, there is a viral video going around the internet where a father admonishes his daughter for complaining about her chores on facebook.  In the video, the father reads the daughter’s incriminating post and then “answers” her concerns.  Now, I don’t know if this video is a fake or not, but I do want to say a couple of things about the dad.  1.  He claims to be in I.T.  He fixes computers for a living, yet he is wearing some kind of Indiana Jones – type hat.  2.  He gives the entire chatising speech from an Adirondack chair in a non-descript grassy area.  I mention this because I assume that most computer geeks do NOT own Adirondack chairs, nor have access to the outdoors.  3.  He stutters.  I do not mention this to pick out someone’s flaws.  Lord knows, we are all flawed.  This is a requirement for a human being.  However, this dad stutters as if he’s memorized something and can’t quite remember it, like he’s auditioning for a high school play.  4.  He shoots his daughter’s computer with a gun.  Really?  Isn’t that a bit much?  Perhaps taking a sledge hammer to it was a little too reminiscent of the movie “Office Space”…However, I can’t help feeling that a man who owns an Adirondack chair, an Australian outback hat, and a glock – is not only not a dad, but also NOT an information technology employee.  I could be wrong.  After all, this is America – a land where people will shoot guns at laptops.

This is the guy.

Now, if the video is, in fact, NOT a hoax then I have to say I almost agree with this gun-toting, dad-jean-wearing, redneck with a stutter.  You see, American children have become soft.  I know this because I was one.  We no longer work hard and the saddest part is, we start working hard when it’s almost too late…when everyone else has already made it.

Let me explain – in the comments section of the viral dad video a man laments about
the malaise of middle class American children.  He talks about how they are lazy and spoiled and how THIS WOULD NEVER GO DOWN WITH AN AFRICAN CHILD.

I have to say he’s not the only one who feels this way.  I remember Oprah saying that she specifically opened her school in Africa and not the U.S. because African children LOVE going to school.  They thrive at school.  They are dilligent workers.  Whereas, in contrast, American children are fat, lazy, and crying for Nikes and ipods.  We are whiners looking for a free ride and a cute, mobile, device to take with us.

However, I do think it’s hard to motivate a child who has access to cable, a dvr, and processed snacks from the age of 8 onward.  I worry about this with you, my gayby.

I, for one, did not work hard enough in school.  I thought for sure that I would skate by on my charm and sense of humor later in life.  That has only about half worked out.  I want you to have it easier.  But, that means working harder – when it counts – in the beginning.

They say that children can only see the right now.  They say that the ability to see the big picture and strive to fulfill longer term goals is something that only a mature mind can process.  So, my motivation techniques for you, the modern child – surrounded by tech gadgets and all that the internet can offer – is to simulate a third world existence.

The buck stops right here.  (And it might as well, seeing as it’s not even worth much anymore.)  You will work harder.  You will succeed.

Here are some things I’m going to put you through in an attempt to lock down your Harvard education:

You will carry water for no reason.
Everyday you will carry water for ten miles.  Yes, we have modern plumbing.  Yes, our faucet pours clean water into a jug at the twist of a hand, but this modern convenience is not for you.  You will have to carry water for ten miles around the house, loop for loop, if necessary – in a jug with no handles.  The more difficult the receptacle is for carrying, the better.  You will work out how many times you’ll have to lap the house in order to equal ten miles through an algebraic equation.  Then you will set your alarm for early enough to complete your ten miles before school.  You will complete the ten miles, while I chirp into your ear about how lucky you are to be born into a family that has running water because this would be your life somewhere else, only without school as a refuge.  After your mileage, you can have a wash with the container of water and a drink if you like.  (Hopefully, the drink before the wash.  Hygiene!)  If this endeavor does not motivate you throughout your school day, then there is no hope. 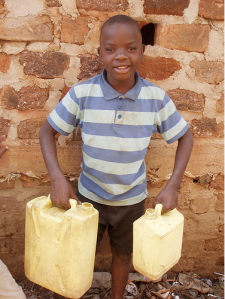 We should all pay for his education.

You will move rocks back and forth.
If for some reason the water-carrying doesn’t do it and you’re still getting bad grades then we will set up a work camp in the garage.  The garage will be cleared out of everything except for a pile of 25lb. rocks.  Across from the pile of rocks, about ten feet away, will be a big X in chalk outline.  You are to move the pile of 25lb. rocks one by one, placing them on to the X.  Once the pile has been reloctated to the other side, you will start the process all over again.  While you move rocks for no reason, I will explain to you that this is what mindless office work, waiting tables, and barista jobs feel like.  If you want to move rocks for no reason for the rest of your life, then, of course, continue to get bad grades.  But, if you want to do something interesting then study.  It is your way out of the quarry. 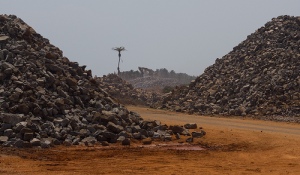 It's this or your homework.

Eating gruel.
If you are sitting in front of the computer or texting instead of studying or learning, then I will make oatmeal.  And I will make that oatmeal badly.  There will be too much water in it, the oats will not be cooked properly, and you may even find a pebble or two.  Not a fruity pebble either, gravel, like from the driveway.  This is what you will eat because this is what food shopping is like when there is no money to pay for groceries.  You eat gruel.  At the table, we will sing a song together to soothe your tears.  The song goes like this, “Eating gruel is cruel.  Better do well in school.  Eating gruel is cruel.  Better do well in school.”  This sort of positive thinking will help you to apply your nose to the old grindstone.  It will also undoubtedly ensure you develop a desire to cook your own food.  A win-win, as mommy could use a break in the kitchen every once in a while.

Arranged Marriages with the Elderly
A lot of young women in third world countries are forced into horrible arranged marriages with creepy older dudes.  They are usually forced into this situation when they are still children around 12 or 13 years of age.  For American children, that’s usually when the disinterested, talking-back-type of trouble starts.  So, your other mother and I, have visited local nursing homes where we have made videos of potential mates that if push comes to shove, we are thinking of selling you off to.  All of the potential mates are over 80 years old (have had background checks to avoid pedos) and are in poor health.  We have done this to make sure that they are not appealing to you in any way, incase we have a young Ashton Kutcher (likes older broads) or Lisa Marie Presley (likes older dudes) on our hands.  If you do not do well in school, then instead of college you will be betrothed to someone who is almost deceased.  If this is not a good motivation, then there is something wrong with you.

If school doesn't work out...

Play Dates with the Duggars
Being two moms, we’ve most likely had to have you through some kind of ultra-expensive fertility method.  That being the case, we could only afford to have one or two of you.  Even with such a good child to parent ratio, there may be times where you think others have it better than you.  There might be times when you think to yourself, “I wish I lived with the Caproettes.  The Caproettes give their children free reign on the internet, android phones, and jazzercise lessons.”  If you ever feel like our punishments are too harsh or like we don’t love you enough, for those times, we have arranged play dates with the Duggars.  You will live with the Duggars for exactly one week.  During this time, you will be cared for not by a parent, but by an older, disinterested, and annoyed sibling.  You will have to fight for your food at the trough against the other 32 Duggars who have been fighting for their food longer then you.  You will be subjected to prayer 52 times a day.  You will be forced to massage a pregnant woman who is your mother for the week, but who can not remember your name.  As a result, she will refer to you only as #33.

My guess is you’ll come back to us screaming and grateful.  My hope is that you’ll beg us to just let you study.

My only goal is to make sure that you succeed.  That is how I love you.

If liked reading this, you will enjoy:

Letters to My Gayby #2

Sweet Mother is updated daily.  You can subscribe via email below.