I remember having a conversation with a very funny comedian friend of mine after a show.  We were talking about comedy and how impressions and jokes about moms are always funny.  They are universals because almost everyone has a mom.  Almost everyone can relate.

I have jokes about my mother being an immigrant, which she is.  She’s South American.  I can not tell you how man Indian people have come up to me after shows and said, “Oh my god, that stuff about your mom.  I can relate, I can relate.”  It made me realize that the immigrant thing is a universal.  Insert Indian/ Latina/ Chinese immigrant mom and change the accent, put your true spin on it, and you’re going to have funny.  Just ask Margaret Cho.  She does impressions of her Asian mom constantly and it is always funny.

The only comedian I’ve ever seen do the dad thing well is Hugh Fink.  (I’ll include a link to his stuff at the bottom of this piece.)

Interesting.  Are they or aren’t they?  Now, obviously there ARE some funny dads.  For example, if you’re a dad who writes a blog – count yourself out of the unfunny dad category because even simply the act of writing a blog means you probably have more of a funny gene then most.  But, with my dad, I think it DOES somewhat hold true.  Out of the pair, my mom is the funny one.  My mom is fall-down hilarious.  My dad – more of a cornball.  Dad’s jokes ALWAYS elicit groans from my brother and I.

Now, I make my mom laugh all the time and she makes me laugh all the time.  Sometimes she’s too serious and sometimes she’s too ridiculous, but there’s pretty much an open flow of energy and laughter there.  My dad, not so much.  He’s sort of a somewhat serious guy.  The subjects he loves, he LOVES.  But, they are often the subjects that would put everyone else to sleep.  For example, he could pontificate for hours on oil pipelines and the Catholic church.  I mean snooze-ola fest.

There is one time however that I made my dad laugh and it was so delicious that it is forever emblazoned in my mind.

I was fully an adult at this point and I was sitting at the Thanksgiving dinner table.  My mom was going on and on about the hardships of being an immigrant when I had had enough.  I said, “You didn’t leave Colombia due to lack of opportunity.  You left because your mother was a bitch.”

It was the expression on my father’s face that I will NEVER forget.  He lit up like a child.  It’s as if I had vocalized something he had thought for decades and never been able to express.  He laughed and his eyes twinkled and he just soaked it up.  And I thought to myself, “Jesus, I hit the nail on the head with that one, far more than I know.”

When I turned 30 years old, my parents did a very cool thing.  They both wrote me letters about what it was like to be my parent and about what it was like when I was born.  I still have both of them.  They are two of my most treasured possessions.  The whole thing was my mom’s idea, of course.  And her letter was pages and pages and pages.  My cousin and my girlfriend, at the time, sat with me and read the letters over my shoulder.  We read my mother’s and then started on my father’s.  My father’s was only about 3/4 of a page long, but by the end of it – all three of us were in tears.

The best parental gifts cost nothing at all.

My dad comes from that generation of guys that have a hard time expressing themselves.  I can’t believe what a disservice has been done to that generation of men.  Sure, some of them got past that whole facade of “men don’t cry” bullshit, but most of them didn’t.  My dad didn’t.  And I think – a lot of times – that must suck for him, not being able to let stuff out when he needs to.  I also think he has a touch of Aspergers, which doesn’t help either, but it does make him a whiz at fixing pretty much anything.

Anyway, I always think that my heart and my humor comes from my mom, but my backbone and my spine comes from my dad.  Dad has a persistence that is otherworldly and he is undoubtedly the reason that I can stick to anything like writing for example – even when it’s hard. 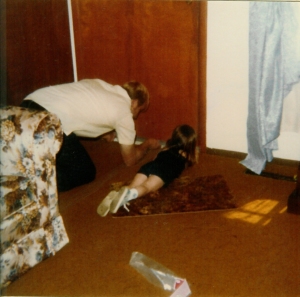 Fixing things with my dad is one of my best childhood memories.

As I look more and more into “alternative” families I do wonder sometimes about the displacement of the dad.  For example, I know a guy who is the father to a baby for two lesbians.  He’s a straight guy and the one lesbian was his best friend, so he donated his man-stuff for her.  The kid knows him, but he is definitely known as more of a “Super Uncle”.  He’s Super Uncle Jim.  Since Jim is a poet and has an unstable living situation, this is a great arrangement for him.  He sees the kid when he wants and gets to be a dad – on the side.  But, what about the gay men who do NOT want to be dads on the side?  Sure they can adopt or have their own kids via a surrogate, but I think a lot of times they get left out of the “alternative” family building process because chicks still own their uteruses – even though the government often thinks THEY own them, but that’s a subject for another post by another blogger.

I was sitting in the green room on Saturday night talking to some comics about lesbians having children and I told them about this experiment that I just read about.  Apparently, a group of scientists have made a baby OUT OF TWO EGGS.  That’s right, they took one egg and made lady-sperm out of it and fertilized the other egg with it.  Now, I know that sounds like something out of Space Odyssey, but you have to understand when you’re in love with another woman – there’s something cool about that.  I’d love a kid that’s a little bit me and a little bit wifesy, although that will probably never happen during our lifetimes.  Sure, they’ve made some kind of baby-something out of these two eggs, but they did it in mice.  And I’m pretty sure if they did it in humans, the poor thing would come out with fins.  I can handle a lot of things, but a finned-gayby may not be one of them.  So, I’m not hip-hip-hooraying this little advancement just yet.

To me, that would be the most unfunny thing of all – no dads?  Yuck.  I’d rather a trove of cornballs then no dads whatsoever.  It saddens me, even though, at the same time – I’m all for the advancement of lady-only babies.  Yet, I don’t want all the men gone.  Ugh, I can feel that song, Where Have All the Cowboys Gone play as I write this cheesy line, but it’s true…

Who will wear their sandals with socks when they mow the lawn then?  Who will teach us how to build a birdhouse or a carburetor or a 401k?  Who will make us cry by saying very little at all?

Hello, I think we need both genders – danglers and built-in coin purses – BOTH.  A world without either is a very unfunny thing.

Sweet Mother is updated daily.  You can follow this happy blog by clicking the ‘follow’ button at the top right of the page.

If you like this piece, you might want to check out the “Letters to My Gayby” series.