You know, there are very few things in place to help artists in the United States.  Sometimes I look at Canada’s funding for the arts and I get jealous.  You could say Americans produce more, but it is simply because we have more.  That’s how it seems to me.  More people equals more competition equals more and more, etc.  What we almost never do – in this country – is make it comfortable for the artist to grow and thrive.

So, that’s why I’m sincerely bummed out that an old New York establishment is closing down.  The restaurant was called, “Mickey Mantles.”  It was named after one of the greatest Yankee players of all time.  The beauty is I’m not even sure if a minority of its waitstaff could’ve told you any of Mickey’s vital stats.  Unless, it was printed on some memorabilia somewhere.  Why?  Because almost all of us were artists or creative types. 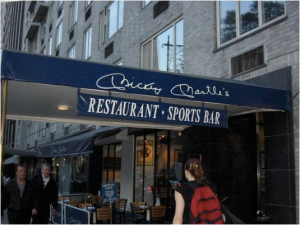 Mickey’s from the outside…

Mickey’s was great – during the time I was there – because the waiter’s ran the roost.  Sure, we listened to our managers and tried our best for the customers, but bottom-line the staff was given a lot of leeway.  Bartenders and waiters could take off for months to go on tour with a play and, yet, come back to jobs waiting for them.  The staff was so big that even if you got a cool audition, show, or job – last minute – you could find someone to cover your shift for you.

We also – for the most part – really liked each other.  In this weird, “we’re all in it together sort of way.”  The staff, I’m talking about.  We all commiserated over the very indignity of having to wait tables at all.  We dreamed big and shared it with one another.  And when a customer took their, “customer is always right” axiom to a way too far extreme, we stuck up for one another.  I distinctly remember a table that had me – a tough girl – almost in tears after asking me for their 5th basket of free bread while I was trying to keep my head above water in a way too full section.  I complained in the kitchen only to have my friend run the 5th basket of bread contents all over her nether regions and then place it back in my basket to bring to the table with a twinkle in her eye.  Then there was the time that Abraham stuck up for me with a table that I took way past my shift end time because my relief was late.  I didn’t want the customer to wait, so I took his order and started fulfilling his requests.  Perhaps, I was rushed a bit, I don’t know.  When Abraham took over for me, the customer complained about me.  He said, “I don’t know what her problem is, but she was way too rushed, way too fast.”  And Abraham said, “Sir, she’s a very good waiter.”  As simple as that.  There was the time a customer actually did make me cry.  My buddy, Luke, asked me what I was upset about.  When I told him, he went over and took the matter up with the customer himself.  I don’t know what he said to him, but I will say, the guy was very nice to me after that.  We were a team, in the best sense of the word.

Mickey’s from the inside…

I think the customers felt that.  We liked each other.  We liked our jobs.  Well, as much as you can like bartending and waiting tables when you’re really aspiring for something else.  Regardless, this liking each other environment really made for a distinct and jovial atmosphere.

Then there was the owner.  The restaurant was run by Ben.  Ben was a monster of a man, in the teddy bear sense.  He and his brother had been in the restaurant business forever and I actually had the good fortune to work for them both.  Truth be told, as restaurant bosses go, they were very nice to me.  But, Ben was a character in and of himself.  He was a funny guy, an over the top guy, and everybody knew it.  Now, some could say that was a downside.  I’m going to say it wasn’t.  I’m going to say he created the atmosphere in which we thrived.  I’m going to say HE was half the reason people came into the place.

When new management took over, it just wasn’t the same.  The love was gone and the horrible vibe of a corporate environment, desperate to hang on, took over.  Things got serious.  The owners started wearing suits.  And all the good artists…the good, creative types, well, most of us got up and left.

It’s so interesting how places have their moments in time.  Mickey’s had 25 years worth of a moment.  I would say a good 18 of those years were spent steeped in the happy, waiter-friendly, environment that spilled over on to the customers.

There were days and nights that we made the same day rate as doctors, while we worked our asses off, and stole small sips of wine from plastic cups tucked into the wait station.  There were days that it was so slow that we were home within two hours.  There were games.  Man, were there games.  Games and world series where sometimes the vibe at Mickey’s was BETTER than in the stadium itself.

But, there were always the waiters.  We were always there.  For a while, Mickey’s itself seemed to look after us.  I remember running my first marathon right past the place and it felt like the building was cheering me on.  It was the best place you could be as a creative type who still needed to eat and pay a bill or two.

It’s a shame that a new wave of actors, comedians, writers, and dancers won’t get a chance to sell both tourists and locals big, beef burgers and never ending iced teas.