Things are going well at the lodge, which is what I’m calling our new place.  We’ve got these high-assed vaulted ceilings that are pretty awesome, but also a lot of work.  We’re going to need painters to come in and I think they are going to need jet-packs or some kind of scaffolding, but jet-packs would be way cooler.

The view from my bed this morning…

Since Wifesy and I have this new place, we’re embarking on some new beginnings of sorts.  We are – basically – setting some goals.  I’m going to land a writing job.  We’re going to get out of debt and save some dough for maybe the first time ever and we both want to lose some weight.

Now, of course, when it comes to that last one, Wifesy and I are in completely different hemispheres.  Wifesy can maybe lose 5lbs before she starts looking all Kate Moss-ish.  I need to lose like 40 before I start looking all Kathy Bates-ish.  She-sus Christ, indeed.

How in the hell did this happen to me?

My mother almost died.  Very recently.  Last year, while I was in Scotland.  I was a bit removed feeling from it, being so far away.  But, I knew something was up because my brother kept calling me.  He kept saying, “Mom’s not okay.”  If that’s not a sign like a cartoon-anvil across the forehead than I don’t know what is.  Mom was in the hospital with pneumonia.  What scared the bejesus out of me is that at first they thought she had  congestive heart failure.  Take a look at the Wikipedia link, I did and it wasn’t good.  Thankfully, she didn’t have that.  It was a horrible pneumonia.  She had diabetes, to the point where she now had to take insulin shots, and her asthma was off the charts.

My mother has had crippling asthma for as long as I can remember.  She’s also always been on the heavier side and she loves her booze.  My mother is not your typical, “let herself go” type of fat mom.  You know, one of those roundish women you see who hate their lives on The Biggest Loser.  My mother has always been the life of the party.  She laughs harder than anyone else, tells the best stories, and overall just enjoys herself.  She loves, loves, the pleasures of life and a lot of times this involves good food and good alcohol.

I have this vivid memory of my mom and my aunt sitting in beach chairs, ankle deep in the Atlantic Ocean surf, with a pitcher of margaritas between them.  They’re laughing and laughing and laughing.  My mom is holding court and telling stories to anyone who passes by and us kids are weaving in and out of their thighs as we splash around in the water.  The whole time – and it was hours – I remember my mom going, “You know, my legs are getting kind of numb.  These margaritas have got to be strong.  Did you make these margaritas extra strong?” She asked my aunt.

Hours later, my mom and aunt finally got up from their cocktail chairs.  They realized – instantly – that they had both been sitting in a school of baby jellyfish…for hours.  Hours and hours.  The back of mom’s legs looked like Maine lobsters.  But, she just laughed it off, as she often did.

I have another equally strong memory.  My mother and I had just come home from having lunch together.  My brother is gay and my mom was trying to process it, trying to deal with it in her own way.  I remember sitting on the couch and watching her as we were talking.  She got up, went over to the liquor cabinet, grabbed a bottle of Johnnie Walker Black Label Scotch, shimmied back over to the couch, and sat down with it.  She never opened the scotch.  She just held it, like an anchor, or a baby, or a leaning post.  I have no doubt – in that moment – it steadied her.  She didn’t even take a drink, but the idea of the bottle and the stuff inside, it helped her.  If that doesn’t say “drinker” than I don’t know what does.

So, my mother gets ill and recovers.  My dad was afraid, my brother was afraid, and I was in a quasi-denial.  But, thank god, she recovers.  Once my mother recovers, she does something she’s never done before.  She stops drinking.  Completely.  Not even 1 cocktail here or there.  Cold turkey with no help.  The woman is almost 70 years old.  She stops drinking and she starts eating really well and she loses 75 lbs.  She’s now the skinniest member of her family, meaning the skinniest among her brothers and sisters.  She also now fits into my jeans, which honestly made me wince and awed me all at once.

I can’t tell you how proud I am of my mom when it comes to this accomplishment.  She’s fought weight her whole life.  Her entire life.  She’s kept the 75lbs off for close to a year and she’s given up drinking completely.  She is no longer on insulin meds for her diabetes.  Her asthma is under control.  And even greater still, she did it all while still being married to my father!  I say that because I KNOW my father was not one bit helpful when it came to her diet.  Only two of them live in our old house together, yet, my dad still shops for 4 people.  He buys every junk-filled thing you can think of.  It’s his nerves.  I swear to you.  My dad is like one of those people who survived the depression and as a result now has a compulsion to hide food under the bed.

My dad has never had a weight problem.  He can’t stop moving.  I’ve inherited a little bit of this from him, as well.  I like to move.  I like to do stuff.  My mom prefers to sit, as does my brother a bit, I think.

So, the fact that my mother lost all of that weight while basically living in my fathers version of Willy Wonka’s Candy and Carb Emporium – is NO small thing.

I know that as I sit here, I have to lose my extra weight – permanently – like my mom did.  I have to eradicate it from my life.  Even though I would rather watch an hour of Fox news a day then workout.  I’d rather read those boring, sale bin books at the library then give up my booze.  I’d rather watch Charlie Rose drone on and on in a Charlie Rose interview with a Dead Person marathon than give up my Mexican food.  What I’m trying to say is that I’d rather take on anything else than undergo this project.

Yet, I have to do these things.  I’ve got to do them, even as Wifesy sits there all skinny and pretty, I’ve got to do them for me.  Sorry to get all Oprah, but I have to break the cycle and stop myself from having a super, fat gayby.  I would rather a healthy child than a super-sized, American baby like this: 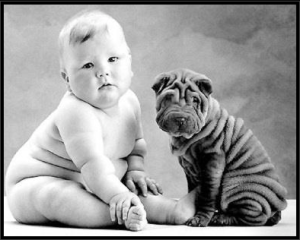 Gayby, is that you?

Gorgeous, Gaysian, Gayby, Momma loves you with all of her heart. That’s why I’m telling you to put down the Snickers!

A fat gayby would be my fault because if you have a kid that size it IS your fault.  They can’t buy their own food, so somehow YOU are doing it to them.  I honestly feel that if I don’t stop it now, it’s destined to happen.  So, I’m going to stop it.  My new slogan is — FAT GAYBY NO!

I also have to figure out how to talk about it in this blog without going completely Bridget Jones Diary on you all.

I really don’t want to start every post with something a la Bridget.  For example:  Started day off well.  Had a protein shake and a hard boiled egg.  Lunch was a salad.  Evening went to the dogs.  Had 3 skinny margaritas and a chalupa wrapped in Fritos from Taco Bell.  Btw, Taco Bell will wrap anything in anything.  What’s next a hot dog wrapped in leftover liposuction remnants?  What the hell will they call that?  The Gordo Perro, surely.

So, I have to find a way to Sweet Mother-ize it, so I can discuss it here.  Regardless, today we start.  The rest remains to be seen.

All photo credits today from veryfunnyblogspot, which has an abnormally large collection of fat baby pics.