Okay, many different paths have lead me to the topic for this post.  However, one particular path sticks out.  It was a news piece that I’m seeing covered by many different news outlets.  The subject of that piece was and I’m paraphrasing:

“Saudi Arabia to Allow Women in the 2012 Olympics”

Really, SA, really?  I mean, let’s get with the program.  What’s next, allowing dark people to vote?  Jesus Christ.  I’m liberal and EXTREMELY open to other cultures and lifestyles, but this irritates me.  It’s right up there with the fact that Saudi Arabia DOES NOT ALLOW WOMEN TO DRIVE??!!  Are you kidding me?  What’s next taking all the Asians off the road?!  Good God.  (For my Brits, when a Yankee says Asian – it means people with a bloodline connected to Japan, the Koreas, China, and maybe the Philippines.  When you say Asian, it means South-Asian.  I don’t know why we have this difference, but we do.)  If you don’t know, there’s a pervasive and ridiculous stereotype in the United States that Asians can’t drive.  It’s right up there with women can’t drive or be responsible for their own uteruses (thank you, Virginia!), etc.  But, while we’re at it we should just voice all the other ridiculous thoughts STILL in existence, out loud.  Here are a few – black people can’t speak well, women can’t be funny, gay guys can’t catch a football, the irish are drunks, the mexicans work in the kitchen, etc, etc, etc.  I MEAN ARE YOU FECKIN’ KIDDING ME?!! IT’S 2012.  At the very least, United-Racists-of-the-World, you should get some new material because you are very, VERY hack.

And Saudi Arabia, you are a sexist.  Period.  And not like a lightly-dipped-in-sexist like that dude from Cornell who says the ladies can’t do no science, like a complete and total – DON’T TOUCH ANYTHING, READ ANYTHING, DRIVE ANY WHERE, OR EXPOSE A WRIST – because you have a uterus and a vag and if you did anything like that it would feck up millions of generations to come.  Men, would not be able to handle you driving around doing errands or exposing a wrist or your natural hair color or – god forbid – bopping around in a jog-bra after a soccer ball.  They can not handle it.  Once women do those things, men will be forced to walk around with constant erections bumping into things like the arm of a toll gate-bridge that has broken free and continually slams itself into oncoming cars.  It would be chaos.  It’s obvious.

Good God and I’m going to say it, “Sweet Mother of Christ” – what a pack of a-holes I have to deal with.  Saudi Arabia, when you are that much of a stereotypical idiot, I’m going to make fun of you.  It’s that simple.

Here’s what my comedy brain thought when I first heard about your incredibly forward thinking news:  “Hmm, Saudi Arabia is going to allow women into the 2012 Olympics.  Well, how are they going to compete in the swimming events?  Surely, in all those Burkas THEY WILL DROWN.  Not to mention, swim into other lanes because they can’t see a feckin’ thing.”

It is very hard to swim in this, so I train in other ways.

Jesus Christ.  I played sports for most of my childhood and my only regret is that my father wasn’t more like Serena Williams’s dad pushing me to excel from the cradle right on to the center court at Wimbeldon.  Saudi Arabia, you like your money, let’s be honest  – I know you like money since you’ve allowed your kingdom to sustain something like 4,000 princes – and the professional tennis circuit PAYS.  You could have a stable of princesses bringing honor (and dollars) to the kingdom by batting a tiny, little, yellow, ball around, but no instead of seeing opportunity you see heresy.  This is shortsighted, to say the least.

So, what can we learn from this?  Not much.  I, for one, thank god I was born here and not there because I can assure you I would’ve been stoned by now.  And I don’t mean stoned in a “let’s get high and enjoy and outdoor music festival” kind of way.  I mean stoned in an – ouch, ouch…okay, his cousin looked at me – but, how is that my feckin’ fault! – and now the villagers are all throwing rocks at me kinda way.

Okay, I need to calm down.  Breathe.  Breathe.  Here’s the truth.  Sports are good for girls.  Sports are good for boys too.  But, here’s why they are especially good for girls – women can be catty towards one another, BUT when you LEARN to be on a team, when you mess up and the defensive wing behind you fixes your mess by re-stealing the ball that was stolen from you, well, when that happens – you start to think of other women as your true FRIENDS and TEAMMATES.  Now, most sensible people realize thinking of your own gender with a fraternal sense of camaraderie and not with a competitive, “I have to get that good sperm before you get it because it’s the best sperm around and this is part of natural selection and I need to make the best babies like a crazy, aryan-baby-maker…and well, because I’m a whore” – this mentality is not good for society, whereas the “let’s be friends” mentality, obviously, is. 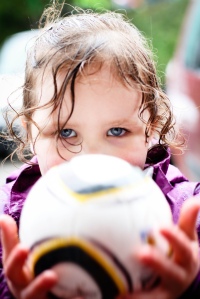 Honestly, who is this harming?

Yes, I know women’s professional sports don’t make as much money, BUT they make good human beings and in the end that’s worth way more than a bunch of d*cks who get paid too much, feck everything in sight, and are so bored that they pay some dogs to fight in their backyards.

Women playing sports IS what used to be good about sports.  Sports used to be about human beings fighting without weapons TOGETHER for a common goal that is higher than themselves.

***
As always, Momma would love to know what you think.  Do you play front-of-the-Wheaties-box potential for one kid and nothing, but Barbie dolls for the other?  Or are you a fan of healthy competition for all?

***
Sweet Mother is updated daily.  You can follow by clicking the “follow” button at the top of this blog.
**

They Call Me, Sweet Mother

80 thoughts on “Raising a Champion”