Oh, it’s been a cruel, cruel summer.  I started this blog out with such a fervor.  I was in a frenzy.  I was frackin’ dedicated.  I’m still dedicated, but I’ve got the wahs and the blahs.  If this long, hot, cruel, summer doesn’t end soon, I fear I’ll have nothing left to write about, but paper bags.  Don’t think I won’t do it?  I will.  Heck, I could talk about the plastic bag right now… Did you know the sanitation departments of America often refer to plastic bags as, “Satan’s resin” because they never feckin’ break down?  Did you know that Los Angeles has nearly outlawed the plastic bag?  I have a joke for that and it goes:

Los Angeles has outlawed the plastic bag.  You have no idea how funny it is to watch Tom Cruise pick up dog poop with a bev nap and a pair of salad tongs.

But, you see, I threatened to talk about PAPER bags and now I’m talking about plastic ones.  I am always, always getting off track lately, it seems.

I suppose certain questions make it into the Americana dictionary like the sentence, “Pepsi or Coke?”  “Paper or Plastic?”  “Paltry or Sweet?”  Maybe that last one doesn’t make sense to you, but I promise it will in a moment.  As I toil through the summer doldrums, I’ve been looking around the tumbleweed-filled blogosphere that is WordPress on break from school.  I’ve been looking around for inspiration.  Even though there are a lot less eyes on said blogs, there is a lot of creativity happening.  One place to find it is within the blog-o-cubbie of this week’s Reggie: 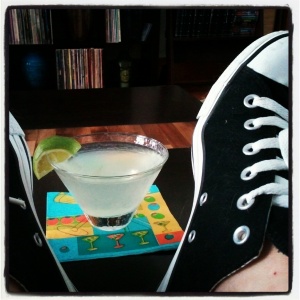 Paltry says margs make her craptastic.  Though this picture was taken a while ago and she is currently both alcohol-free AND vegan now, which is making me think EVERYTHING must make her craptastic these days.  I mean, I had kale last night and no.  That’s all I can say is, “No!”

I took a short reader’s jaunt through Paltry / Cristy’s blog… (and keep in mind there’s nothing “paltry” about Cristy, I’m simply using her real name for people in the know.  Or not so in the know, but who now know because I’ve told them.  Oh, you get it.)  Well, her blog made me want to forgo my own blog and just read hers by a beach somewhere all summer.  You know, I want to crack her blog at the spine and get on a floaty with it as my margarita melts in the cup holder.  Oh, yes, I do.  I truly do.  Suffice it to say, everything she writes is good.  It’s all interesting, and funny, and meaty, just the way I happen to like my writing.  There’s her most recent piece on the Huffington Post’s limbo dance under a very low bar, there’s her wonderful soliloquy on the right of a dining customer to one’s own table salt, there’s a mini-piece where she goes toe to toe with a child resulting in the term, “baby rhyme,” and then there’s the Alan Alda debacle.  Oh, how I wish I had been there for the Alan Alda-scapade.  I would have died laughing.

If you know what’s good for you, you’ll follow PALTRY MEANDERINGS OF A TALLER THAN AVERAGE WOMAN no matter what height you are.  If you’re a writer, you can’t afford not to.

I also happen to love good dialogue written by a good writer.  You will find a lot that at meanderings and the beauty is that it’s always laser focused.  I just can not say enough good things.  I heard about Cristy through another writer and when you start hearing about another blog via word of mouth, chances are it’s because they’re very good.

I’m not the only one who thinks so.  Cristy’s PALTRY is so good that it was “Freshly Pressed” right after her very first post.  Let me repeat that.  HER BLOG WAS FRESHLY PRESSED THE VERY FIRST TIME SHE EVER PRESSED THE PUBLISH BUTTON.

I don’t even know how that’s possible.  But, I do know that in the lonely world of blogging, it’s nice to know there are other strong, writer, professionals out there.  It’s comforting, to say the least.  So, follow her and you can thank me later.